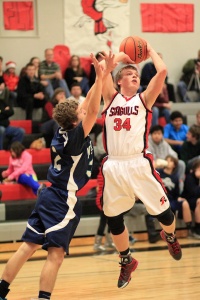 Raymond set up its showdown for the Pacific League championship by blasting Northwest Christian 68-32 Saturday night at Seagull Gym. Darol Ratsavongsy plugged in 15 points for the Seagulls.

“We jumped out to a quick 12-0 lead and never looked back,” Raymond HS Head Boys’ Basketball Coach Mike Tully told the Herald. “Our defensive pressure allowed us to get a number of quick and easy baskets. We were able to get everyone some good playing time and work on some things.

“Before the game, we honored our senior basketball players, Carte Bisbee and Andrew Hamilton, who were playing their final home game. We also honored injured seniors Marcus Lundy and Alec Oatfield for their contributions over the previous three seasons.”

“We really spread the ball around and played as a team,” Coach Tully said. “Our pressure gave them problems and we moved the ball really well.”

Marvin So made six steals and handed out five assists.

Christian fell to 3-16 overall and 2-9 in the Pacific League.

Raymond went back to basics and whipped up on Naselle 73-50 last Tuesday (Jan. 22) at Seagull Gym. Four players hit double-figure scoring for the Seagulls.

“We tried to go back to basics and worked on moving the ball around and playing as a team,” Coach Tully said. “Five guys in double figures showed we were able to do that.

Raymond led 16-9 after one quarter and 38-28 after three quarters. The score was 49-37 heading into the fourth quarter.

“We jumped out to an early lead, but Naselle was able to keep within striking distance until we made a decisive run at the end of the third quarter and early in the fourth quarter to push the lead over 20 points,” Coach Tully told the Herald.

“I thought we did a god job of applying pressure at both ends of the floor,” Tully said. “Our defense wore them down and pressured them into a number turnovers.

“Offensively, we did a really good job of moving the ball around and getting everyone involved,” Tully added.

The Gulls took 33 more shots than the Comets. Raymond was 31 of 78, while Naselle was 18 of 45. Raymond committed only nine turnovers.