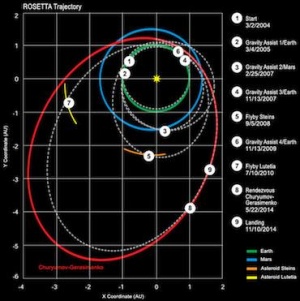 November holds great promise for those of us amateur astronomers. The Rosetta spacecraft, launched in March of 2004, will release the Philae Lander toward comet 67P/Churyumov-Gerasimenko.

In May of this year it was the first man-made object to orbit a comet. During its travels it has watched as the Deep Impact mission struck comet Tempel one with a projectile, flown by two asteroids, received three gravity assists from the earth and traveled over 6 billion miles. This European Space Agency mission to divine secrets of comets has a long history. A spacecraft launched in 1978 originally known as ISEE-3 (International Sun-Earth Explorer) then renamed ICE (International Cometary Explorer), flew past Comet Giacobini-Zinner in 1985 then past Comet Haley in 1986. Since this time we have edged ever closer to the goal of landing on and sitting in the front row of seat of a celestial body as it passes the sun and begins to grow a tail and release gases into the solar wind.

Rosetta and its Lander Philae will finally accomplish this goal. In November the spacecraft will approach within 2-4 km and kick Philae out into the descent pattern. There are propulsion systems on the Lander but they are not used to slow it down but are used to push it down onto the surface needed once it has made contact. The Lander will float down at a stately pace of about 2mph as it is pulled by the light gravity. Not fast right? Well the comet has an escape velocity of about one meter/second so if it hits and bounces it could just fly away. This is where the propulsion system comes in to hold it in contact until the two velocity activated harpoons and the drill screws on the legs anchor the 200 lbs Philae down.

Once on the ground Philae will begin to conduct an array of experiments, including one similar to the Viking spacecraft that searched for life on Mars. There are ten instruments on-board that will conduct a wide variety of experiments as well as provide close up views of the landing and test sites.

It is believed the Lander will continue its mission for at least one week. There is hope it could survive much longer, depending on the conditions as the comet moves closer to the sun. Perhaps some years later a scientist will revive it and renew its mission or give it an entirely new one as has happened to ice (the original comet chaser) after being revived and reprogrammed 36 years after launch and many years of silence.