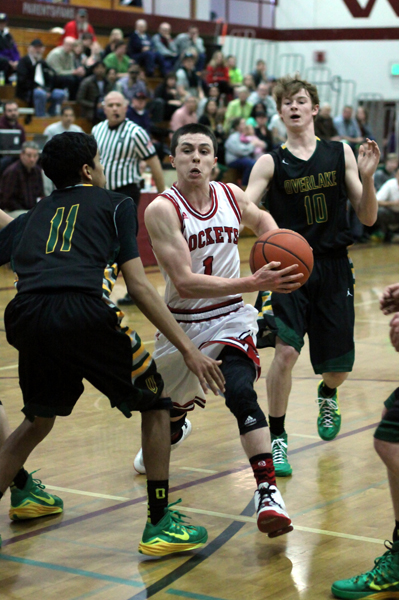 Ty Jonson (center) drives through a maze of Owl defenders during a WIAA Regional playoff game on Saturday afternoon. The Rockets came out on top 66-58 to advance to the WIAA State Tournament in Yakima on Thursday.

Don't tell Castle Rock Head Coach Kevin Johnson that his boys are upsetting teams as they advance in the WIAA 1A State Basketball Tournament, like they did Saturday afternoon with a 66-58 win over Overlake School of Redmond at W.F. West High School.

The victory puts Castle Rock into the field of eight teams that will begin the final drive toward the gold ball on Thursday in the Yakima Sun Dome.

"We may not have been the best team in our league because, for the first four or five games, we were trying to find our way," argues Coach Johnson. "We are playing our best at the end and we have improved a huge amount. Our record is better than people think it is. We lost three games when, literally, we had plays overturned in overtime after we had made the shot to win the game. We played a lot of AA schools down in Oregon so I think that we have done everything we can do to get to this spot."

Early in the first quarter, Overlake's 6'7" Charlie Friend was giving the Rockets fits with his footwork under the basket. Adding insult to injury, CR big man Mason Klingberg picked up his second foul in a matter of minutes after the opening tip, effectively making him a statue on the bench until after halftime.

"We felt like we had to be physical and stay attached to their bigs and they were really hurting us," said the coach.

"Nick Proudfit, Taite Kleine and Dakota Golden gave us about 12 of the best minutes that we could ask for," added Johnson. "Dakota particularly because he is the guy that gets spot minutes here and there and he went out there and just guarded his tail off.

"Through that time, the two little guys (the Coaches' sons Ty and Brock Johnson by the way) just kept making plays and giving us separation."

The latter was probably the understatement of the local high school sports year. Ty and Brock Johnson shot lights out and when they couldn't launch, they would penetrate like buzzing bees and then kick the ball out to the other Johnson or a skip pass would find a Johnson for a three. In doing the math, the two brothers accounted for 56 of the Rockets 66 points. Klingberg added six during his limited minutes.

It was amazing to watch and a convincing victory. The Rockets jumped to an early lead and maintained it despite a late threat by the owls.

Castle Rock drew their first round match against defending state champions and 26-1 Zillah in the Leopard's back yard of Yakima on Thursday. A tall order even by Coach Johnson standards

One could say that the Leopards are right where the Rockets expect them to be: The favorite. But don't expect Castle Rock to be the least bit intimated.