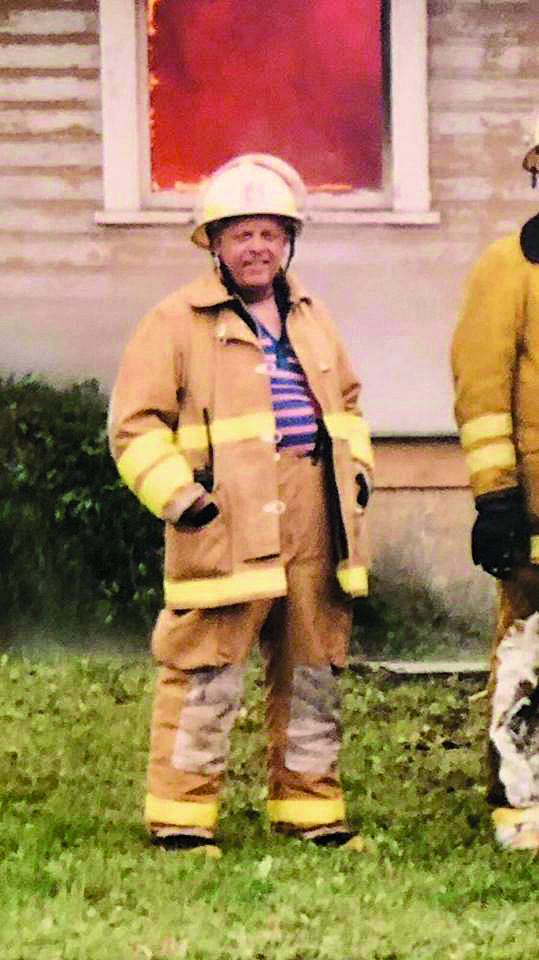 Richard Lloyd Anderson, 81, lifelong resident and community servant of Winlock, passed away suddenly at home on October 22, 2018. Born in Toledo to his parents Lloyd and Hilda Anderson (Sobolesky) on August 30, 1937, he grew up attending the Evaline School through the eighth grade, then graduated from Winlock High School in 1956. He immediately began his career of 42 years working to build bridges for the Northern Pacific Railroad (now BNSF).

Winlock has lost a giant in the realm of community service with the shocking and unexpected passing of former Fire Chief Richard "Andy" Anderson. The legacy he leaves behind will be unmatched for decades. Most of the community knew him, however, few know just how much of an impact he had. Most did not know he was a veteran of the US Army. His involvement in Lewis Fire District 15 (Winlock Fire Department) spans over 6 decades.

Chief Anderson rose from the rank of volunteer firefighter to Chief. After retirement he was elected to multiple terms as Fire Commissioner. He was vital in the transition of a good volunteer "old school" fire department into the paid career and volunteer state-of-the-art department under his direction and guidance.

Under Chief Anderson:
9-1-1 emergency service in the Winlock area, (transitioned from party line phone alert system where firemen had fire phones in their home and the fire department called a 7-digit number party line number and a phone rang to all those on a party line);

First Set of Airbags Lifting System in rural south county which was the only type of lifting system between Vancouver and Centralia;

First female firefighter in Lewis County to be sent to the State Fire Academy in North Bend;

First "Attack Tender/Tanker" in rural Lewis County. Prior tankers could only haul water and could not attack a fire. Attack Tenders have pumps and equipment that can fight the fire if it is the first vehicle on scene;

First department to implement a written bloodborne pathogen training policy and curriculum. Later this was adopted and used as a model by the state for all first responder departments;

Contributed to the formation of initial paramedic system into Lewis County, known as St Helen Medic One. later called the South County Medic One system;

The wonderful Fire/EMS service today with a paid 24-hour crew exists because of the strong foundation built under his leadership;

Chief Anderson has had a tremendous impact on many who desired to join the ranks. A case in point, the Assistant Fire Chief of Kodiak Alaska, Battalion Chief of Riverside Fire Authority, Federal Air Marshal, Assistant Fire Chief LCFD#15, FF/Paramedic for King County Medic One, and many more career first-responders got their foot in the door because of the leadership and assistance of Chief Anderson.

He also served on the City Council for Winlock and served as a Police Commissioner. Many men today enjoy hunting and shooting sports due to Chief Anderson, as he was one of the first Hunter Safety instructors and a Gun Safety instructor.

The list of his accomplishments goes on and on.

Chief Anderson's dedication to the safety of members of the department was always his priority. He kept the department on the cutting edge of the the fire service. To say he will be missed is an understatement. His presence will always be with us. His love for this community and his dedication to his neighbors and strangers alike has set a high mark not many will achieve but we owe it to him to always try.

Travel on in peace Chief Anderson, you will be missed but never forgotten.

Mayor Bradshaw who has known Chief Anderson for decades stated "A long time personal friend, a good advisor as to what was going on in the community. He was 100% for Winlock, he would do anything that was asked of him and he did."

Upon finally retiring from his full-time and volunteer careers, one could find Richard spending time with grandchildren, flying remote-controlled airplanes, hunting in the woods, checking in at the Fire Department or having a visit with his favorite bank tellers at Timberline Bank. In all of his activities, with his infectious smile and genuine curiosity about those that he would meet, he never knew a stranger.

A memorial service is scheduled for 1:00 p.m., Saturday, November 3rd, at the Winlock High School (241 N Military Rd, Winlock) with a graveside service and reception to follow. In lieu of flowers, the family requests donations be made to the Winlock Volunteer Firefighters, P.O. Box 705, Winlock, WA 98596.