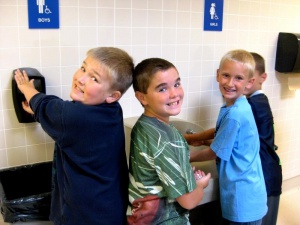 Photo by Kayla Camenzind Boys washed their hands before lunch in the new sink, which is automatic and shared between the two bathrooms, a favorite aspect of the remodel among the kids.

Superintendent Rob Friese explained the funding for the project: “When the new high school was built, the board made a commitment that as soon as enough money could be saved in state forest dollars (money distributed from the state from state timber sales that can be used for capital projects) that the elementary would be modernized. That time came. All money spent on the project was from that fund and no community tax dollars were used.” Friese said the school provided around $1 million and the state matched the school’s funds with $670,000 along with an energy grant of $158,000.

“Obviously we want to start rebuilding that fund again. We’d like to finish the project at Willapa by tearing that gym down, because it’s dilapidated, and rebuilding some kind of a play shed/gym, but we’ve just been in the beginning stages this year of looking into that. We’ll wait until we build up more in our ‘debt services fund,’ which is coming from the state timber dollars [also known as the timber excise tax]. We’re kind of looking at that are our next project down the road,” Friese said.

Friese explained that the elementary building was modernized in the remodel. “A new heating and cooling system was installed, replacing the old oil furnace we had before. The building was completely insulated (it had no insulation before) and new windows were installed. The configuration of
the office was modified, providing an area for the principal, nurse’s room, conference room, and staff work room.  All classrooms have new cabinets, carpet, computer workstations, student desks and chairs, teacher desks, Smart Boards, and wireless Internet access throughout the building.  The
kitchen and cafeteria were completely upgraded, including new cafeteria tables. The electrical and lighting was all upgraded, including motion sensors in the classrooms for more energy efficiency. Key card access to the doors provides more security, along with a camera surveillance system.” The school also obtained two portables to house the preschool.

During the year of construction, elementary students went to school at the Menlo Middle/High School in portables. “It was a tight fit, but we had a good plan and a great staff, wonderful students and supportive parents that made it work,” Friese said.

Youngster Lauren Emery commented that she most liked, “that we have a new school.” She also likes the fancy classrooms and is excited to use the Smart Boards.

Second graders Hadley, Kaylee, Emily, and Gaige explained that their favorite subjects in the new school are math, reading, and writing. A favorite among the girls was the new sink by the bathrooms.

“You have to put your hands under the sprayer thing and then the water comes out,” Hadley explained.

“I like how I have a big classroom,” Kaylee commented. “My favorite part about the classroom is the new desks!” Kaylee also explained that she enjoyed using her school supplies in the desk, especially her new sharpie and highlighter.