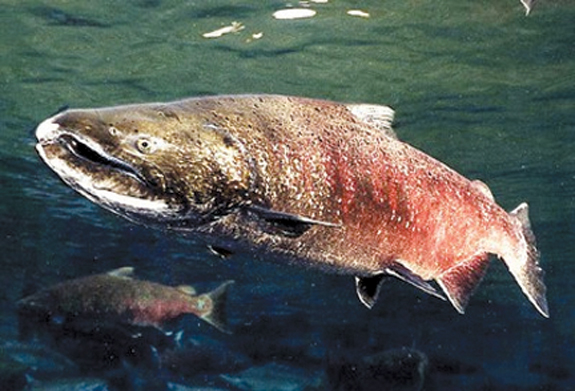 Chinook salmon are returning to the Columbia River for spawning season in record numbers this year, leading to new laws allowing for a longer season.

A new rule adopted in both Washington and Oregon allows anglers to catch Chinook salmon through the end of the year as more salmon are returning to the Columbia River than any time in the past 75 years.

The Washington Department of Fish and Wildlife (WDFW) has said new regulations have extended the Chinook season past September and were put in place specifically for the record-breaking return.

Based on the most recent fishing forecast, 664,000 to 835,000 upriver bright adult chinook are expected to return to the Columbia River this year, well above the previous record of 420,000 fish set in 1987. Already, more than 48,700 chinook from a variety of upriver stocks crowded up the fish ladders at Bonneville Dam Sept. 7, setting a new daily record.

"This will be a fishing season to remember," said Guy Norman, southwest regional director for WDFW. "This year's run of upriver fall chinook is through the roof, and a positive sign that regional efforts to rebuild this salmon population are making a difference. These new rules will increase fishing opportunity for anglers, while providing protection for the wild fish returning to the lower Columbia tributaries."

The new regulations also allow anglers to catch and keep up to two adult chinook salmon per day as part of their catch limit below Bonneville Dam, though only hatchery chinook with a clipped adipose fin and healed scar may be retained downstream from the Lewis River through Sept. 30. Then, starting Oct. 1, anglers fishing that area may retain either marked or unmarked chinook after most of the wild tule chinook have moved out of the mainstem Columbia.

"We might have already seen the peak of the run at Bonneville, but there still will be good fishing in the lower Columbia River during the weeks ahead," said Joe Hymer, a WDFW fish biologist. "Meanwhile, this year's huge run is starting to show up in fisheries hundreds of miles upriver."

Anglers fishing below Bonneville Dam can retain two adult salmon, two adult steelhead or one of each as part of their daily limit. Fishing rules vary further upriver and anglers are encouraged to check WDFW's Sport Fishing Rules pamphlet and Emergency Rule website at wdfw.wa.gov/fishing/regulations/ for details.

Like last year, anglers will be allowed to retain up to six adult hatchery coho on all tributaries to the lower Columbia River with hatchery programs. Those rivers include the Cowlitz, Deep, Elochoman, Grays (including West Fork), Kalama, Klickitat, Lewis (including North Fork), Toutle (including Green and North Fork) and Washougal.

Chinook retention is limited to marked hatchery fish on those river systems, except on the Klickitat River, Deep River and Drano Lake, where anglers can also retain unmarked chinook. Mark-selective fisheries also will be in effect on the Wind and White Salmon rivers.

On the Lewis River (including the North Fork), only hatchery chinook may be retained through September. At Drano Lake, anglers may keep any coho (adipose fin clipped or not) throughout the season.

Meanwhile, anglers are still catching walleye above and below Bonneville Dam. Trout fishing is also still an option at a number of lowland lakes, including Swift and Merwin reservoirs on the Lewis system, where anglers can take advantage of increased catch limits for rainbow and kokanee. At Swift Reservoir, anglers must release all salmon larger than 15 inches in length and any bull trout or steelhead they intercept. Also, anglers can keep 10 hatchery rainbows per day at Lake Scanewa on the Cowlitz River.

For anglers who don't mind a hike, September is also a great time to head for the high wilderness lakes around Mount Adams and Mount St. Helens. Hymer recommends three such lakes - Goose, Council and Takhlakh - that all offer drive-in access.

"The mosquitoes should die down around the high mountain lakes after the first frost arrives," Hymer said. "Sure, the fish are usually small, but the leaves are beginning to turn, the air is crisp and you can really experience the change of season."