Reasonable alternatives: Why some subjects survive encounters with law enforcement and others do not 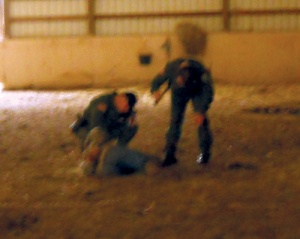 Suspect Matthew Pettit (on ground) being examined by Lewis County Sheriff’s Deputies after a standoff, which involved four tazer deployments and an assault on an officer March 14.

Deputies responding to the 100 block of Smokey Valley Rd., south of town, were told that resident Matthew Pettit was acting erratically, had made threats against the lives of his family, and was possibly armed due to the absence of a .22 caliber pistol from the collection of firearms at the residence.

When deputies located Pettit, he was alone in a horse arena on the property, rolling on the ground with his hands concealed, speaking incoherently to himself. While two officers approached the subject to make contact, a third stood back with his firearm at the ready, prepared for any indication Pettit should be taken out.

Deputies are afforded their own judgment when responding to such a situation, and are encouraged to resort to deadly force when no reasonable alternative appears to exist. Alternatives do not always appear to exist, but they may still exist, as subjects like Pettit do survive their encounters with law enforcement.

So what turns an arrest deadly? What can change a Matthew Pettit into a Steven Petersen, who was gunned down near Napavine June 20, 2011, after also being described as armed and unstable? Can the use of force be clearly defined or carried out when an officer’s judgment is the fulcrum upon which life and death are decided?

There doesn’t seem to be a simple answer to that question, according to Lewis County Sheriff Steve Mansfield, who was kind enough to sit down with Town Crier and discuss the many factors and sentiments that can turn an encounter with law enforcement lethal.

Mansfield’s office has recently had to account for two officer-involved-shooting deaths within 16 months of each other (first Petersen, then Gregory Kaufman Nov. 1, 2012). He has stated numerous times, and during our interview, neither use of deadly force was inappropriate for the situation at hand, and said he would like Lewis County residents to understand that deciding to use lethal force is not so simple as waiting for an arrest to meet specific criteria.

"It’s just not a matter of whether we go there and some guy pulls a knife and we shoot him," said Mansfield, stating that a myriad of factors lead up to a decision to use force against a subject, including proximity, physical stature, availability of backup, and immediate threats to persons and property. "You have to look at the dynamics surrounding each situation because they’re so different."

"These are incredibly dynamic situations, especially with emotionally-disturbed people," said Detective Duke Adkisson, responsible for the regular training and evaluation of Mansfield’s deputies on how to employ the use of force.

Adkisson said encounters with subjects rarely follow a pattern, as far as the escalation of danger during contact, and can rapidly go from docile to deadly depending on the actions of a subject.

"The second the handcuffs come out or something crazy goes off in this person’s head, the fight is on," said Adkisson, stating deputies are trained to respond with varying levels of force depending on varying levels of threat.

Mansfield added his deputies are encountering more and more situations where the use of force—deadly or otherwise—is needed to protect themselves, as arrests involving drug use and untreated mental illness are being encountered more frequently.

When Pettit was taken into custody, he was behaving in a manner suggesting a manic episode or a meth trip, though he professed himself to be speaking with spirits at the time. When Petersen was shot, he had just had a dispute with his girlfriend and was believed to be under the influence of prescription drugs. When Kaufman was shot, he was exhibiting symptoms of severe depression and it is assumed he was intending to be killed when he advanced on the deputy.

"Every day we’re dealing with mentally ill people here," said Mansfield of the Lewis County Jail, stating no other local facility is currently equipped to treat such patients and that treatment lasts only as long as their jail sentence. "It’s a huge liability and responsibility, and a burden on my staff over there."

Mansfield said he believes current efforts to implement county-funded mental health services should help reduce the number of violent offenders his deputies encounter, and even serves on an advisory board to recommend effective treatment programs to Lewis County Commissioners.

"We will see a change because many of the people that we deal with are repeat offenders, or what we call ‘high utilizers’ of the criminal justice system," he said of those who develop a criminal history due to untreated mental illness.

But if reducing violent encounters is a matter of sobering up a suspect or finding them the help they need, why shoot them? Why not make every effort to talk the situation down and give the suspect a chance to correct his or her behavior? Mansfield said that this is already a part of policy and that deputies are trained to take every opportunity to de-escalate a situation before using any force on a suspect.

"We get into situations each and every day that could result in a use of force," he said, "and it’s because these guys are good—they’ve been trained, they know how to talk with people how to deal with these situations—they de-escalate way, way more than they ever have to apply force."

Mansfield said he expects his deputies to hold back and not intensify a volatile situation, stating they are evaluated after every use of force to make sure policies were followed and the officer is well-enough, emotionally and mentally, to return to the field.

"We only use the force necessary, and these guys had better de-escalate that use of force when it’s no longer necessary, because if we don’t, that’s abuse of our authority and abuse of the law," said Mansfield.

But he also conceded that law enforcement officers are human and capable of making mistakes as much as civilians. It could be argued that a mistake was made in the death of Petersen because, although he was reportedly armed with a knife when approached that night, no weapon was found on his body. In fact, Petersen’s survivors are staking a $10 million suit on that idea, claiming deputies were not properly trained to respond to the situation.

So, as a human officer in the midst of a struggle knowing one pull of the trigger may lead to a costly mistake, how can one still decide to pull the trigger? Why not just taze them or shoot them in a non-lethal area? In the midst of arguments about less-lethal force and the ethics of shooting to kill, Chief Civil Deputy Stacy Brown said that the choice to use lethal force against a subject comes down to protecting yourself and those you care about.

"We have a right to go home, too, at the end of the day," she said. "I think people lose sight of that."

Mansfield and Brown said it would be neglectful for an officer to not react in a manner that keeps the welfare of their families and co-workers in mind, with Mansfield stating that an officer who does not choose to defend him or herself when lethal force is necessary may be letting down everyone they were supposed to protect during their next shift.

Mansfield added it is only a minority of individuals his deputies encounter who are truly dangerous and intent on harming those around them. He said most are simply good people who have made bad decisions and are having to answer to the law. He said making sure his deputies understand that suspects need to be treated in a dignified and respectful way—regardless of the lawful purpose intended—is the best means of keeping a violent encounter from becoming a deadly one.

"That’s the most valuable tool they have," he said, "is their ability to communicate and talk to people and be fair and show a caring attitude…The amount of force that they use is what is reasonable to affect whatever lawful purpose they’re trying to carry out." 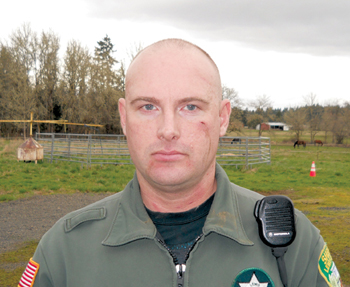 Lewis County Sheriff’s Deputy Chris Fulton with a cut under his left eye suffered while attempting to take Pettit into custody. According to Fulton’s report, Pettit attacked him after Fulton discharged his tazer to bring down the subject. The tazer was ineffective, possibly due to Pettit’s thick clothing, and Fulton was kicked in the face before two other deputies were able to take him into custody. Lewis County Sheriff Steve Mansfield uses incidents such as the recent encounter with Pettit to point out how less-lethal tactics can be unreliable in taking down a subject, and lethal options must be maintained in case an officer or civilian are in danger.
Read more from:
TC - Police, Fire and EMS
Tags:
None
Share: