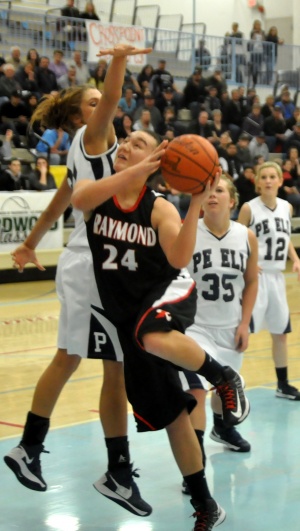 A scoring drought cost Raymond a trip to the Class 2B Girls’ State Basketball Tournament. After being tied 30-30 with about four minutes to go play, the Lady Seagulls scored nary a point and their season was over. A great season it was nonetheless with a final record of 22-4. Raymond lost its Class 2B Region II game 43-30 against longtime nemesis Pe Ell Friday night at Mark Morris HS in Longview.

“We played great defense, but just couldn't put the ball through the hoop,” Raymond HS head coach and Pacific League Coach of the Year Jon Schray told the Herald. “We had plenty of good looks. We only hit 4 of 23 from three when we are used to hitting around 10 if we shoot that many. They are a very good team and we pushed them until the end.”

Second-ranked (AP) Pe Ell scored the first 10 points of the game and outscored RHS 18-6 in the first quarter and 13-2 in the last quarter – that was the difference in the game. The game was knotted at 30 with 4:24 left to play and then Raymond’s offense went dead. Raymond was 1 of 10 from the floor in the fourth quarter.

Raymond could point to its shooting woes for the loss – connecting on only 11 of 42 field goal attempts for 26 percent. Meanwhile, the Lady Trojans were downing a respectable 40 percent (16 of 40). “The bottom line was we weren’t hitting our shots,” Schray added.

Pe Ell’s Alissa Brooks-Johnson stood out as the best player on the floor with a game-high 13 points and teammate Taylor Ratkie scored 10. Courtney Hagain led Raymond with eight points. Raymond’s Abby Manamen, the Pacific League MVP, was held below her season average of 16 points by scoring only five points. Hailee Williams added five points for RHS.

Suiting up for the last time for RHS were Hagain, Shilo Boyes, Amanda Koski, Dalia Silva, Manaman and Macy Karlsvik.

Maneman’s trey with 16 seconds left in the game spelled victory for Raymond over Toutle Lake, 55-53, Monday night at Centralia. The win gave Raymond fifth place at the District IV tournament.

“The girls dug down deep and pulled together,” Coach Schray said.

Manaman and Hagain scored 15 points each and Hailee Williams drilled in 13.

The Lady Gulls opened the game by draining their first six shots. Raymond led 18-6 after the first quarter before the Fighting Ducks cut the deficit to 29-22 at halftime. The Lady Seagulls’ lead was chopped to 44-42 after three quarters. Toutle Lake tied the game at 51 with 2:34 to play and took the lead 53-51 and still led 53-52 with 1:17 left of the clock.

Onalaska made a first half lead stand up during a 46-41 victory Feb. 16 at Rochester. Maneman scored 14 points and sophomore Aiysha Garcia added 13.

The Loggerettes led 17-9 after one quarter and 29-17 at halftime. Raymond outscored OHS 24-17 in the second half but could not erase the deficit.

“It was tough to catch up after their run in the first quarter,” Coach Schray said.

Raymond won the Pacific League title, Schray was named the league’s Coach of the Year and Maneman was the league’s MVP.

“The season on the whole was a success,” Schray told the Herald. “To finish 22-4 overall with a 19-game win streak going into the playoffs was a great accomplishment. Even taking the fifth-place spot in our district is something to be proud of. District IV was the strongest district in the state this year. Four of the final eight came out our district. I'm very proud of the accomplishments of this team.”
Read more from: WHH - Front Page
Related Articles:
Tags: None
Share:
Copyright © 2017 by
Powered by Bondware
News Publishing Software