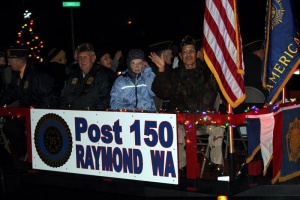 On a warmer then last year, December 6, Raymond residents turned out for the evening Lighted Parade and the arrival of Santa Claus.

Vendors providing hot drinks and bakery items greeted those bundled citizens of Raymond as they lined the street for the parade. The laughter of children with wonder in their eyes was the overlaying enthusiasm taking hold of the night. Two groups helped warm the night with the Girls Youth (U10) Explosion fastpitch team represented offering baked goods and warm cider to help raise money for the upcoming season; and money being raised for a cross country junior Olympic runner.

Families, friends and local Pacific County residents enjoyed a fun filled night as a community celebrating the coming of Christmas.

Several awards were presented prior to the start of the parade. Winners are presented here: