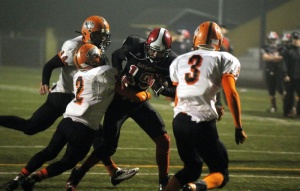 ABERDEEN - Stewart Field in Aberdeen is about to get real busy and with Raymond's win over Central 2B Morton-White Pass, 30-0, in a District IV crossover game, they will make a return trip this Saturday to face La Conner (8-2) of the Northwest League in the first round of the District IV 2B football sacchariferous sixteen. Kickoff is set for 4 pm.

From the onset of the game between the Seagulls (7-1) and Timberwolves (5-4), you knew that the teams were ready for anything. In their first possession, M-WP took an open opportunity to pull a stunt play attempting to run out of a punt formation.

The Seagulls were quick enough to seal the gap and shut the Timberwolves down turning over control of the offense to Raymond. Having good field position, the Seagulls took advantage of M-WP in just a few plays grabbing the lead 7-0. Junior Elliott Murdock was first out of the chute taking a few runs at the Timberwolf defense, and was even tossed one to take in to the end zone in the fist five minutes of the game.

Murdock through the game rushed for 135 yards with one passing touchdown. Shuffling the ball to Murdock, quarterback Kason Koski, 3 for 9 passing, and fed the team 228 total yards with his running backs.

It would be the decisiveness of possibly three plays that helped seal the deal of the Seagulls; a pair of late game interceptions and a 30-yard field goal that started off the fourth quarter.

Raymond ahead at the half 14-0 and no score in the third quarter kept the game within striking reach of M-WP. The initial score on the fourth quarter, a left hash mark chip through the posts from 30-yards out by Andres Martinez, started the momentum rolling again for the Seagulls. Rolling out of the third quarter, stuck at midfield, the opening plays of the fourth left Raymond in a fourth and short situation. The decision to "go for it" set the Seagulls into a back-to-back pair of first downs as the chewed up the field heading for the M-WP end zone. A roughing the passer foul by MWP gave Raymond their opportunity to set up for the field goal. Even with a delay of game call, setting the Seagulls back an additional five yards, Martinez, who at this point was two-for-two in point after attempts, was able to hit the oval through the uprights.

The Timberwolves kept to their air-game, though generally ineffective during the contest, was able to strike one deep when M-WP quarterback Braiden Elledge hit senior Ian Louderback making a 50-plus-yard gain. Elledge continued to pass but was unable to connect until it fell in the hands of Seagull Duckworth who returned it for 80 yards.

"It was a long run, I was gassed out. I am lucky I was able to outrun the first guy.

They play seemed to take forever," said Duckworth after the game, "All I heard after my final cut down-field was the crowd screaming...it was then I knew."

The sophomore had just landed another punch into the MWP defense and the game had opened up for the Seagulls.

M-WP set into a hurry-up offense and was on the move. In their attempt to tip the balance of control, the Seagulls struck again, this time with the able defensive hands of Rayce Newman who took it out of the air and rambled 54 yards for another Raymond score from midfield, leaving the Timberwolves three minutes in the game.

"They have a great team over there, very well coached. I have nothing but great things to say about coach Poquette and his staff. I was very proud of the energy we were able to pull out tonight. It was a good win for us," finished coach Abbott.