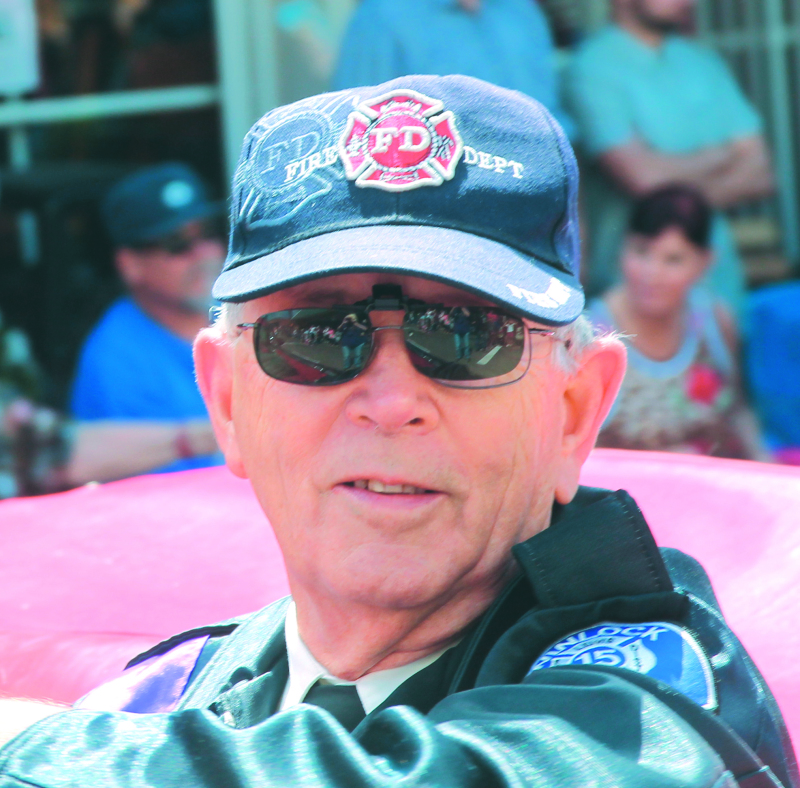 Randy Pennington as a Grand Marshall during the 2019 Egg Day Parade.

Randy Pennington has been a staple in Toledo as a Toledo Police Department Reserve Officer. Randy is not a normal officer, he is truly one of a kind. A man who has helped more people in the community than anyone we know. Randy retired a few weeks ago and the community will never be the same without him. Randy is truly that very rare gem.

Randy has been in the paper many times, talking about his days in Vietnam, his many different roles throughout the community such as Fire Commissioner for Lewis County Fire District 15 (Winlock). He was with the volunteer fire department ambulance crew, where he met his wife Carrie. Randy has been involved in so many different organizations, he's everywhere. He is what we call a true civil servant.

Toledo's Mayor Steve Dobosh said it best, "The bank robbery we had in Toledo was solved thanks to Randy. Randy was the first in and the last out. He searched for evidence before and after the K-9 officer arrived and left. Randy was tracking the same location as the K-9 officer, Randy searched and searched, eventually finding the jacket that the K-9 officer missed. The jacket that the robber was wearing was the evidence that convicted him of the bank robbery. He was first in and last out, that's just how he rolled. Randy will be missed by everyone, especially the community." Randy was last out at the Toledo Police Department but we know he will always be first in!

John Brockmueller, former Toledo Chief of Police and currently Napavine Chief of Police stated, "After over 3 decades of service to the community of Toledo Sgt Randy Pennington has retired from the Toledo Police Department. Randy has been a Reserve Officer since 1986. As a Reserve Officer he works shifts for NO PAY. It is a volunteer position, and he has donated his time to the citizens of Toledo for over 30 years. He has done this with a smile on his face and eager to help anyone he can as everyone who has ever dealt with him already knows. I have known many reserves in my career, but none have ever held this kind of dedication or devotion to a city/department. If anyone ever has earned the privilege of retirement it would be Randy. Many other officers and I will miss his ability to gain information on any case he was asked to assist with. His ability to talk to people and help them even when he was arresting them is amazing. To simply say he will be missed just isn't enough to say. I and others are however very happy for him and his wife Carrie whom I know will enjoy having Randy home for all the hunny dues and kidnapping trips that they can share from now on. Randy will forever be my partner and friend. I absolutely love the man!"

Michelle Whitten who worked with Randy as Toledo City Clerk stated, "Randy has been one of the most interesting people I have ever met. He is an encyclopedia of knowledge and can tell a story like no other. His many, many life experiences can keep your interest as he talks of all the different situations he has been in. But most importantly Randy has one of the biggest hearts and kindest souls you will ever meet. He has been a dedicated volunteer for so many years and just wanted to help make the world a better place. Even though Randy is retiring as a police officer I am sure he will not stop volunteering. I am truly blessed that I was able to cross paths with such a kind human being known as Randy Pennington."

Toledo City Treasurer Jill David stated, "The City of Toledo has been very fortunate to have Randy for 36 years. Giving to our community was his passion and there are not enough words that can be said about him or enough ways to thank him for all that he has done. Randy is one of a kind that will be greatly missed by our community."

Deavon Jacobson, Toledo City Clerk included, "It has been a privilege to work with Randy the last 15 years as his Police Department Clerk. I will miss reading his detailed 10-page reports, re-organizing his case files with numerous copies that are not needed and having him tell me he's heading home at least 3 times before he actually leaves then 10 minutes later, I hear him on the radio responding to a call. I will keep the candy jar full for you always!"

Newer city employee Shelly Allen stated, "Randy is the most amazing kindhearted man you will ever meet. He was very passionate about his job and taking care of all citizens that he worked for. He always puts in over 100% everyday. I am proud to be able to call him a co-worker, but most of all my uncle Randy,"
Donna Wallace, from Donna's Place stated, "Congratulations on your retirement Randy. Thank you for the loyal and dedicated service you have always provided to our community. Your milkshake will be ready and waiting for you. You will be missed!"

"Thank you and your family for the many years of service you have given to keeping our community and families safe," said Sharon Petersen at Toledo Hair Studio.

John Novak, Tammy Stevenson and Brad Dykstra of Southwest Washington Realty in Toledo would like to take this opportunity to thank Officer Pennington for his years of service that kept our community safe. Our first responders deserve our thanks every day!

Randy is a gem in the community, he stated, "I am just retired, not gone. A chapter simply closes, other chapters will open.The good Lord has always been there watching over me, I anxiously wait to see what new doors will open as The Lord escorts me through the door for the next chapter." If the next chapter is what the Lewis County News has heard, then you will see Randy here again in your local paper and in the lives of many who need his positive influence.

The City of Toledo will be having a retirement party for Randy on August 11 starting at 4:00 p.m. Randy has been an inspiration to many and we know he will continue to inspire many!