Ramifications after the rain 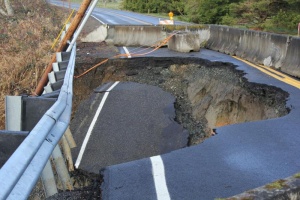 PACIFIC COUNTY - After the latest rainfall that brought a few too many extra inches of ran that could not be handled by city sewer systems, a new color is popping up.

Construction Orange is just one of those colors, as the road systems have suffered because of earth shifting under very wet conditions.

The entrance to the Port of Willapa Harbor in Raymond is now closed due to a 36" culvert that collapsed and a sinkhole that is running under tenant building #5. Traffic is being re-routed through the entrance of Pedigree Catamarans, if you need to get to the Port Office or business at that end or the port.

The hole is being filled with concrete and water has been diverted through other outlets along the port. A small sewage leak has been repaired by Raymond City Public Works as contractors complete the repairs to the exposed area of the port. The repair of the approximate eight-foot wide by eight-foot deep sinkhole is being done under emergency conditions and it is expected that a new manhole will be placed as well as the flow of mountain runoff will be diverted through other means. It is anticipated that by mid-week most of the repairs should be complete, with a more permanent fix being looked at.

Raymond Public Works is continually on the lookout for any areas that are in further need of repair or any additional damage that is slow to be exposed based on the heavy rainfall.

Mill Creek Road off of Camp 1 Road running along the Willapa River has one lane fallen and broken, making one side of the road impassable. The road is still open but narrowed to one lane of traffic around concrete barriers. Road crews are assessing the situation and working on a repair strategy.

State Route 4 has been diverted at mp1 (US 101) and mp4 (SR 401) due to the collapsing of a culvert. The area west of Naselle is being routed to Youth Camp Lane and the C Line. It is anticipated that repairs of SR4 will take several months. The speed has also been reduced through that area. Completion of repairs will take several months and paving will be completed prior to restoring two-way traffic.

Mile 73 or 73.9, depending on direction of travel, along Highway 101 or what many refer to as Rock Crusher Hill, has recently fallen between 3 to 4 feet, and has caused another choke point for local traffic and commerce.

The Washington State Department of Transportation (WSDOT) has diverted traffic by alternating one lane at Rock Crusher Hill. The damage took just a little over one lane of the road away. Stop signs at either end of the ditch and street lights during dark hours, cones and traffic barricades have been set up to ease the traffic around the construction zone as well as the previously reduced speed zones try to keep traffic flowing.

The WSDOT is currently monitoring the ancient slide zone watching for any additional shifting prior to making a temporary fix to the area. At this point the fix will be similar to previous repairs with the insertion of gravel to shore up the road. During the paving season the road will have a new surface, but until then the road will remain patched. With the future of the Rock Crusher Hill now in the hands of the Washington Legislature to fund a permanent fix, drivers are cautioned to take care driving this stretch of the road. Drivers should take caution all through the run from Raymond to Cosmopolis, as several spots along the route still have large cracks, dips and bumps, as well as mud on the shoulders.

At one point after 7.1 inches of rainfall, the road had several diversions, but most have been mended and traffic is free to flow on either side of the Hill.