Quilting for a cause: Learners craft practical quilts for themselves and the needy 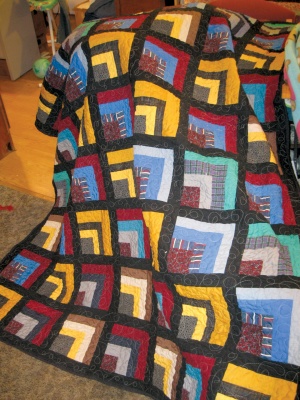 Tristen Roberts, 13, has only been learning to quilt since September, and his first project rivals all but the most experienced already.

Since the middle of September, a local lady has been busy starting up and teaching a beginner’s quilting class near Winlock.

Ruth Gillaspie and her pupils have been meeting every Tuesday from 10 a.m. to noon at the Seventh Day Adventist Church’s Fellowship Hall. That might not seem like a lot of time, but just take a gander at how much they’ve done.

For example, 13-year-old Tristen Roberts has not only learned how to quilt, but finished his own professional-quality coverlet. Many of the other beginners have already completed their own quilts, several of which are to be donated to the charity Possibilities in Centralia.

As for their teacher, Ruth Gillaspie couldn’t be prouder.

"I love to see people make their first quilt and then go on from there," she admitted with a smile.

Although this is her first opportunity to teach, she’s been quilting "since [she] was 16, and now [she’s] 74."

Her philosophy when it comes to quilts is simple, but effective. She’s not interested in making quilts that are so pretty and so fancy that no one wants to place them on a bed. Instead, she’s all about the usable quilts!

Now, if anyone out there is interested in learning from such an experienced crafter, rest assured the class isn’t going anywhere. While they’re taking a break at the moment for the holidays, class will resume the second Tuesday in January.

And, if you’re worried about the cost of supplies, Ruth has already got that covered. She owns literally dozens of boxes of cloth that she has personally collected and/or inherited from her parents, and she is eager to hand it over to any eager participants.

You’ll just need to call Ruth at 785-3917 for an appointment to pick out the choicest fabrics for your project.