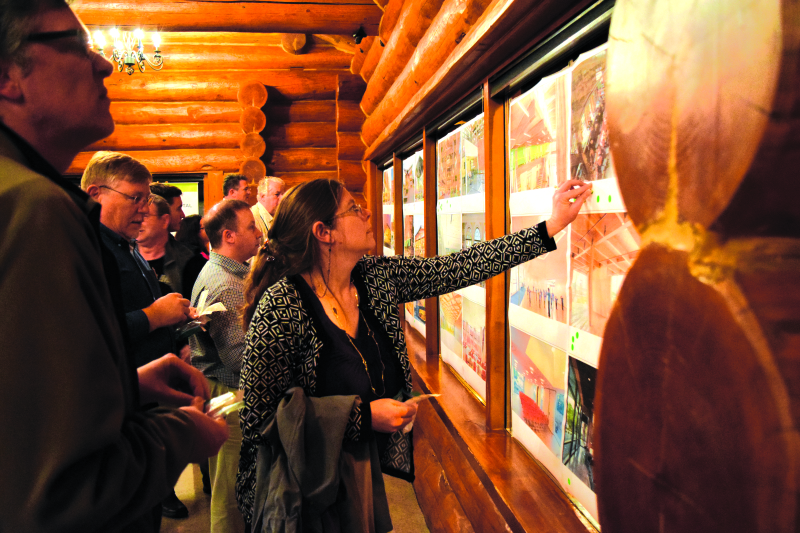 Meeting participants have their say on the design of the Gateway Center during an exercise on Nov. 3. Designers are currently seeking public input on the proposed center in order to put together a preliminary design in accord with the community's needs.

Community members had an opportunity to provide input on the design of the proposed Gateway Center at a meeting held at the Rotary Log Pavilion in Aberdeen on Nov. 3.

Attendees were asked to indicate those general design elements that they either favor or dislike in order to give project architects a better idea as to what the community consensus is surrounding the potential look of the project.

Aberdeen Mayor Erik Larson opened the meeting, saying project designers are trying to solicit as much community involvement as they can in garnering how the facility should look, feel, and exist within the space of the City of Aberdeen and Grays Harbor County.

Larson emphasized the meeting's purpose was not to talk about whether or not the project should be pursued in the first place, or whether an altogether different project might better serve the community's needs, and no critical comment was heard.

"Based on what the project is, what do you want the facility to look like?" was the question Larson posed to those in attendance.

Andre "Dru" Garson, CEO of Greater Grays Harbor, Inc., which is one of the entities driving the proposal, explained that the Gateway Center is conceived as a combined business and enterprise center.

"The enterprise component is an opportunity for us to be able to consolidate all of our resources, such as business development and economic development functions, all in one particular facility," Garson stated.

Garson noted that currently there are a number of disparate places that persons interested in starting or expanding a business must go to find information and resources.

At the same time, Garson continued, the proposed Gateway Center is anticipated to feature a visitor's center component, with the goal of getting people to spend more time and money in Grays Harbor County and perhaps even eventually relocate to the area.

"It's really an opportunity to wow people and have a really impressive facility that can showcase the entire county and all the resources available," Garson said in summation, adding he hopes to see the center function as a catalyst for area revitalization efforts.

Larson noted that the proposal for the center predates his time in office and has come as far as it has due to the cooperative efforts of a number of people.

Though Larson said the City of Aberdeen has been at the forefront of certain aspects of the project because of its planned location, he emphasized it is a community-wide project.

Larson further stated that, as the project moves forward, the exact ownership of the center is something that still needs to be worked out between the several entities involved.

The intention is not to fund the project through a bond measure or by otherwise raising local taxes, Larson further claimed, but instead through varied and creative means, including grants and private partnerships, so that money can be put toward economic development rather than servicing debt.

Bainbridge Island-based architect Matthew Coates told those in attendance that project designers are keen to receive the public's input on the project.

"We want a building that is for the community, by the community," he stated. "I can tell you that there is no preconceived anything about what this building could be in terms of the look and feel."

As part of one exercise, attendees were asked to choose which adjectives they'd like to see a visitor to town use to describe the building. Coates said such questions help designers zero-in on what the essential qualities are that the public wants the building to possess and convey.

Mayor Larson made a point of mentioning that, for those who were unable to attend the meeting, the same information and exercises will be made available online for the time being at graysharborgateway.com.

A second meeting focused on the design of the proposed Gateway Center is scheduled to be held at the Rotary Log Pavilion on Dec. 1 from 6 p.m. to 8 p.m.