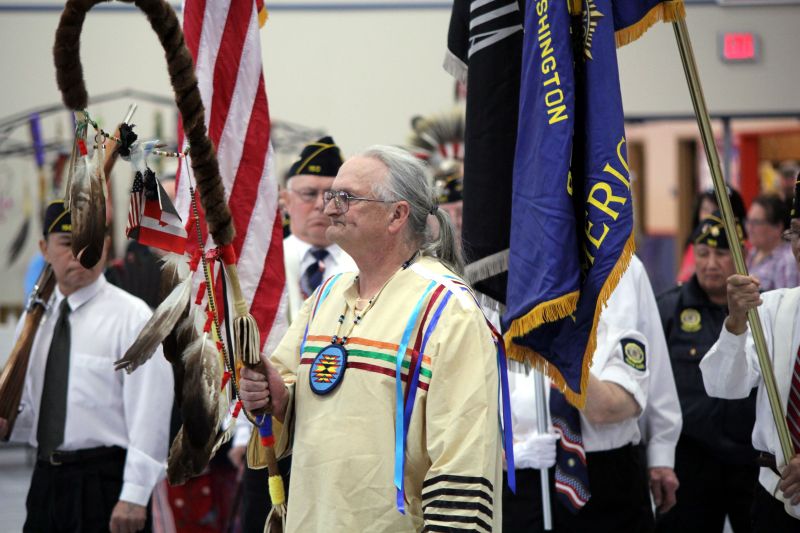 "It's been surreal, it's all finally happening and all coming together and it's just been very relieving. We're lucky, none of the dancers are confirmed or "scheduled", they're just invited and we hope they show up. We've only had one dancer cancel as of today," said Jones. And that cancellation was due to an unforeseen vehicle breakdown.

There were people flooding into the gym at Valley High School that was sectioned off so that the main floor created an open space reserved for the dancers. At the end of the gym sat two drum circles that collected featured drummers for the event.

To start the Powwow, the 1 pm Grand Entrance was triggered by Host Drum Fir Tree Road and the drum circle raising their voices in Native American song as American Legion Post #150 served as Honor Guard for the ceremony paraded in following a member of the tribe carrying a Native American Tribal flag.

Dancers dawned in tribal dress, with feathers and other Native influenced attire followed behind the Honor Guard. The on looking crowd consisted of about thirty people, and after the Grand Entrance, the Master of Ceremonies, Mike Lee, spoke to the theme of Powwows being about togetherness, and asked Jones about what kind of a challenge it has been organizing such an event.

"It's been a lot of work; it's been awesome seeing it all come together," said an overwhelmed Jones.

The drums continued to play as Arena Director Robert Longcrane ushered people from the crowd to follow behind the dancers that had started to dance around the designated area.

As the flags were set and the Powwow took time to honor war veterans by calling them out of the stands and join them on the main floor for the audience to acknowledge and were given a gift for their participation in serving out country. Head man and head woman dancer Kevin and Jennifer King were called to the floor to start the Powwow as others joined them. After this initial dance was over the drummers didn't stop, and various other dances were started.

The children in the crowd were invited onto the floor for the Tiny Tots dance. The focus of this dance was for the kids and whatever parents or chaperones they might have in tow. There was also a Friendship dance. The Friendship Dance once again called for members from the audience to join the circle of dancers from the tribes, and eventually one circle was formed within another, with dancers moving from one to the other shaking hands, symbolic of friendship being extended from the tribes to anyone attending the Powwow.

As part of the ceremony, Jones was presented a Coastal Button Blanket Stole for her efforts in making the Powwow happen.

Food was served all throughout the event, including fry bread, along with barbecued burgers, nachos, chili, and Indian tacos. Venders also attended the Powwow selling things like clay pottery, and beaded items along with other Native American products.

The event went until 5 pm, when the attending vendors and crew took a dinner break, after which they returned to do an evening portion of the Powwow all over again at 7 pm.