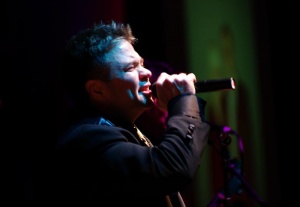 Patrick Lamb will be at the theatre this Sunday.

The good news is there will still be a performance, now featuring Portland saxophonist, songwriter and performing artist Patrick Lamb. His music focuses on “Old School” R&B, Soul with a flavor of Jazz.

Advance tickets for the Feb. 23 performance are now on sale for $12 at South Bend Pharmacy, Sagen's Pharmacy in Raymond and the Raymond Theatre, 323 Third St. Tickets at the door will be $15.

A Jackson, Miss., native, Patrick began paying his dues by playing roadhouse music as a teenager in the rural south where he was inspired by the evocative sounds of James Brown, Stevie Wonder, Ray Charles and Wilton Felder of the Crusaders. Patrick immersed himself in the music of these great artists and began to discover his own sound as both a musician and performer.

In the 1980s his father, a high school science teacher, took the family to Portland, Ore., where Patrick began developing his playing and singing into a career at the early age of 16. He found a way to infuse his southern roots and influences into his musical development, leading him – in the 1990s – to an opportunity to perform and tour with Grammy winner Diane Schuur. Since then he has also toured with legendary R&B vocalist Bobby Caldwell and currently tours with Gino Vannelli and Jeff Lorber worldwide.

His numerous awards began with an acclaimed best soloist performance at the Lionel Hampton Jazz Festival, resulting in a performance with the festival’s namesake. Besides receiving a number of music awards for his work, Patrick’s production company received the Spirit of Portland and the Caring Heart award for contributions giving back and enriching lives in the community.

In 1996 and 1997, Patrick was invited to perform at the White House during the holiday Congressional VIP Tours and was in attendance at “The Peace on Earth Celebration,” leading to a meeting with President Clinton.

Recognized by his peers and community as a world class talent, he was inducted into the Oregon Music Hall of Fame and is the youngest inductee to date.

Join SAL and the community in welcoming Patrick Lamb to the Raymond Theatre Feb. 23. Sponsors for his performance are Seaquest Motel, Riene and Chris Simpson, Jean Shaudys (in memory of Vince Shaudys) and Sagen's Pharmacy. For more information about Sunday Afternoon Live in general, or this performance in particular, call 360-875-5831, or by email at SAL@reachone.com. Sunday Afternoon Live also can be checked out at its website, www.sundayafternoonlive.org.

It’s suitable that Patrick Lamb’s latest solo project, released in July 2011, is titled “It’s All Right Now” – which is just how the folks of Sunday Afternoon Live feel about this last-minute change.