Police memorial dedicated to ‘all the citizens of Lewis County’ 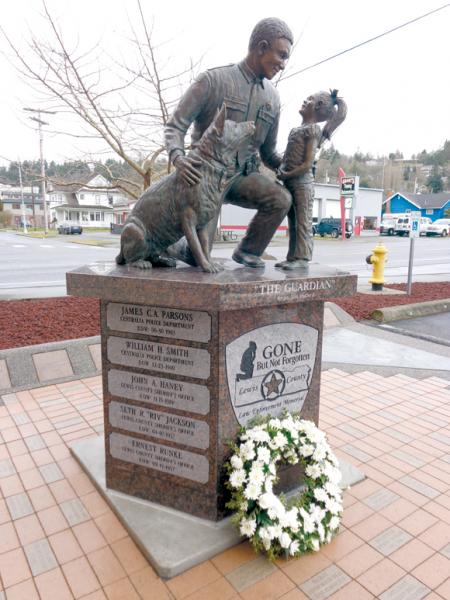 “The Guardian,” a statue cast in bronze, was dedicated Thursday in Chehalis as a memorial to all Lewis County law enforcement officers lost in the line of duty. It currently bears the names of seven men lost between 1903 and 2009.

Supporters of law enforcement gathered outside the Lewis County Law and Justice Center Thursday for the unveiling of a memorial to Lewis County officers who have fallen in the line of duty.

The Guardian, a bronze sculpture by local artist James Stafford, had been the result of four years of planning and fundraising by the Lewis County Law Enforcement Memorial Committee and was dedicated to the memories of seven officers and one K-9 killed since 1903, as well as the residents of Lewis County.

“This monument before us serves many purposes,” said Sheriff’s Office Chaplain Bob Harris during the invocation at the ceremony. “It serves as a reminder of faithful vocation to all the citizens of Lewis County.”

Harris went on to state those who find themselves in occupations of service, such as teachers, doctors, garbage men, grocery store clerks, and many others, serve with the same spirit as those in law enforcement and are no better or worse in the eyes of God.

“There is no ranking these various vocations, no placing one above the other,” he said. “They are all holy and they are all pleasing to God. We honor, we love, and we respect and serve our God when we honor, love and serve our neighbor. This is our highest good.”

Lewis County Sheriff Steve Mansfield said the theme of the statue, which features a child being comforted by a kneeling officer and K-9 partner, had been the result of efforts by the committee to find something expressing both the sentiments of law enforcement as well as the people of Lewis County.

“We wanted something for this community, that was special for this community,” he said, stating the finished product “epitomizes” the attitude of local law enforcement. “As you can see, it depicts a child whose face is one of possible confusion, sadness, fear, frustration. What’s beautiful about it is you get to decide. But it also depicts an officer who shows compassion, kindness, strength, and character. Not just someone who enforces the law but, more importantly, someone who is a guardian, a protector, for everyone who lives in this community.

“I am both honored and feel very privileged to dedicate The Guardian to this community, to the seven officers who lost their lives serving this community, also to their families behind their badge, who suffered in their sacrifice. And to the police officers and guardians who currently work now and will work in the future to protect us.”

Stafford himself spoke briefly before the unveiling, stating he was honored to have participated and was looking forward to meeting the many officers present.

“Never in my life have I done anything more meaningful than this,” he stated, “for those few that are so deserving.”

Mansfield had thanked Stafford for his patience in helping the committee discern what they wanted in a memorial, as well as MDK Construction, who created the base of the memorial in notably-brisk weather, Two Ravens Studio, where the sculpture was cast, and Sheriff’s Office Administrator Sherri Guenther, who has been credited as the individual who brought the memorial to life.

“If she hadn’t spearheaded this project, this wouldn’t be here today,” said Mansfield.

Centralia Police Chief Robert Berg, when speaking on behalf of his department, observed of the names listed with the statue: “While room remains on the memorial panels for additional names, let us hope and pray that it takes a very, very long time for the next panel to be added.” 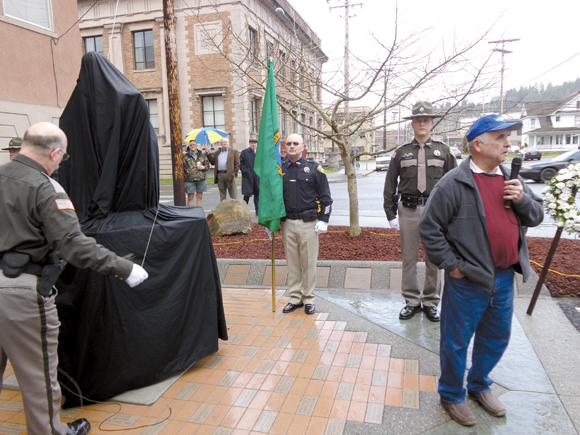 Local artist James Stafford (far right), creator of “The Guardian,” briefly addresses a gathering of supporters before the statue’s unveiling. Stafford had cast the statue with the help of Two Ravens Studio and under the direction of Lewis County Law Enforcement Memorial Committee.