Police cadets take to the streets for EVOC 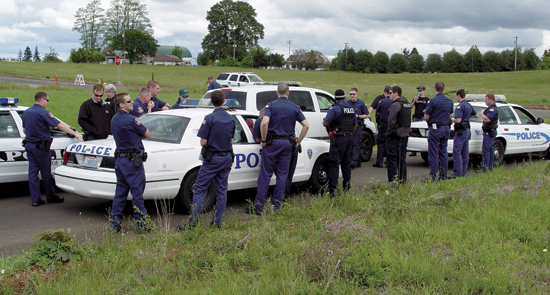 Cadets with the 2013 Police Reserve Academy gather to drive through an Emergency Vehicle Operations Course in Winlock Saturday at the yet-developed Grand Prairie Mountain View Estates. Course instructor Ross McDowell, a sergeant with the Lewis County Sheriff’s Office, said the training was to test cadets’ skill at both low and high speeds, sending them through obstacles such as quick lane changes and threshold breaking, which involves decelerating suddenly from high speeds. Academy Commander and Winlock Chief of Police Terry Williams said vehicle operation is the most valuable training cadets can go through because more officers are killed in the line of duty in vehicle collisions that from other hazards, including firearms.

Cadets prepare their vehicles for the course, which were provided by the various agencies sponsoring them for the academy. Cadets must be able to qualify on the course with their specific department’s style of vehicle before being able to drive it on the streets, and local full-time officers are tested at least yearly to ensure their skill level does not diminish. 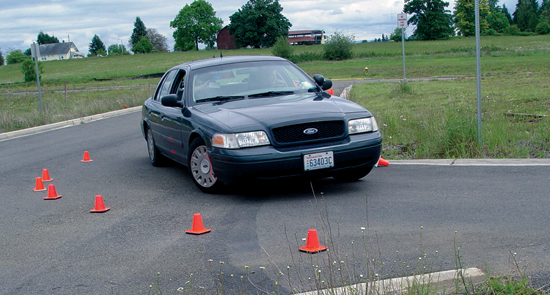 Cadets had to negotiate tights corners at high speeds without displacing any cones, and became progressively faster as their experience on the course grew. Instructors said muscle memory must be developed in order to operate a vehicle safely end effectively while in the midst of distractions such as using their radio, watching for pedestrians and potentially avoiding a suspect’s attack. 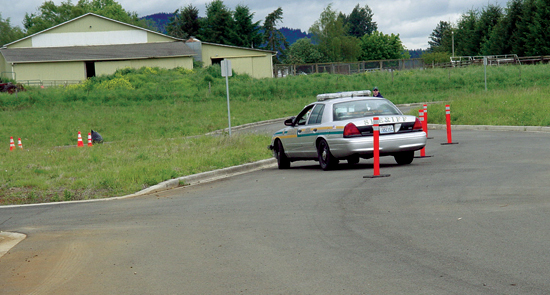 Cadets said the most challenging part of the course was the serpentine challenge, where they were instructed to drive between cones and into a parking space, then back up and reverse their way again through the cones. This practice allows cadets to learn how their car moves around obstacles and how to maintain control while in reverse. 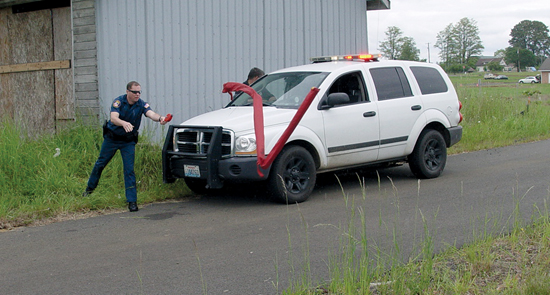 Cadet Micah Rose, of the Centralia Police Department, deploys a set of dummy stop sticks to practice halting a fleeing vehicle. Real stop sticks, or spike strips, contain small tacks that puncture a vehicle’s tire but are designed to not leave the strip itself upon impact. 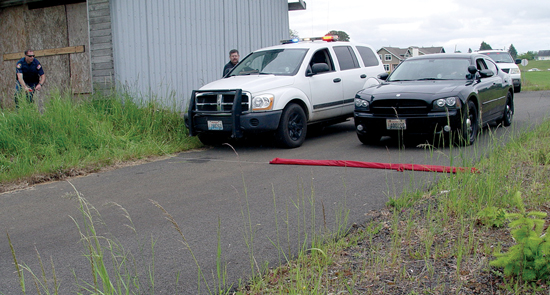 Rose (left) practices withdrawing the stop sticks after mock suspect Sam Patrick (right), of the Toledo Police Department, drives through in his department’s Dodge Charger. Williams (center) was quick to caution cadets against using the string to retract the stop sticks, as the apparatus can quickly be pulled away once impacting a vehicle and may take off their fingers. However, cadets had to balance this danger with the need to retract the stop sticks before the pursuing officer’s vehicle impacted them, which has been no small challenge for local officers involved in high-speed chases in the recent past, including the pursuit of David J. Lee May 9, 2012, in which the lead car from Thurston County was disabled in an unsuccessful attempt to spike the vehicle Lee was driving. Lee was eventually spiked at Exit 72 headed south on I-5, but did not pull over for another 20 miles at which point he had completely worn out his rims.