Pedestrian hit by train in Centralia 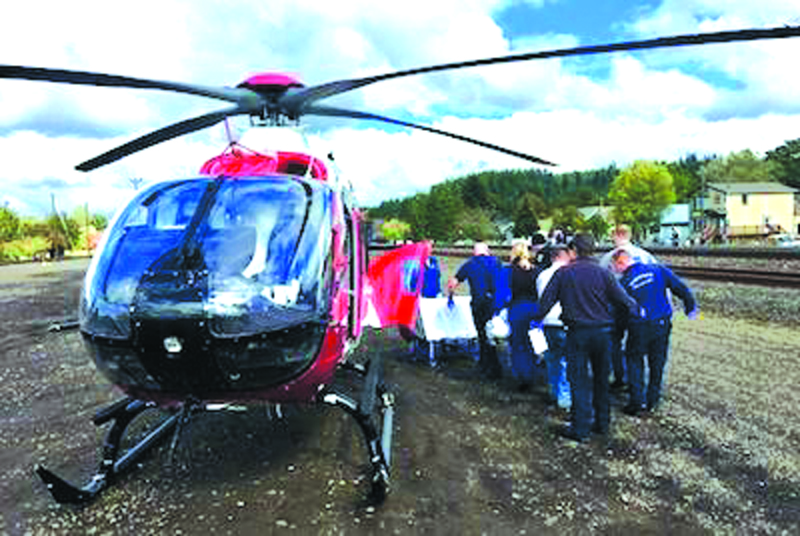 Photo courtesy of Riverside Fire Authority - First responders bring the pedestrian struck by the train to the helicopter and prep her to be airlifted.

Centralia police are working with BNSF to figure out what sort of train struck a 21-year-old woman on Sunday, Oct. 2, and how it happened.

The Centralia woman survived the incident, but was in no shape to be interviewed before being whisked away by a helicopter to Harborview Medical Center in Seattle, according to police.

Nearby citizens heard her calls for help and came out to investigate, Centralia Police Department Sgt. Dave Clary said. "The train was already gone, and it's likely the crew didn't know what had occurred," he said.

Police and firefighters were called about 12:30 p.m. on Sunday to the area about 300 yards north of the Sixth Street viaduct near Delaware Avenue, which runs adjacent to the tracks, according to authorities.

Clary said the woman was hit while crossing the tracks and her only injury was to her foot, although it was significant.

"How her foot was injured and not the rest of her seems to be like a Christmas miracle," Clary said.

Medics with Riverside Fire Authority responded and summoned an Airlift Northwest helicopter to pick her up at the scene, according to Fire Capt. Scott Weinert.

The fire department described her injuries as traumatic, but she was conscious and alert when she departed, they said.

Clary said the public needs to heed warnings about walking over railroad tracks in areas where there is no designated crossing.

"People need to take these trains extremely seriously, and know they will not win with a train," he said. "It was not worth not going up and around the Sixth Street viaduct."

It is illegal to trespass on railroad tracks, and Clary urged people to use only designated crossings.