Party the weekend away at the 22nd Annual Winlock Pickersfest 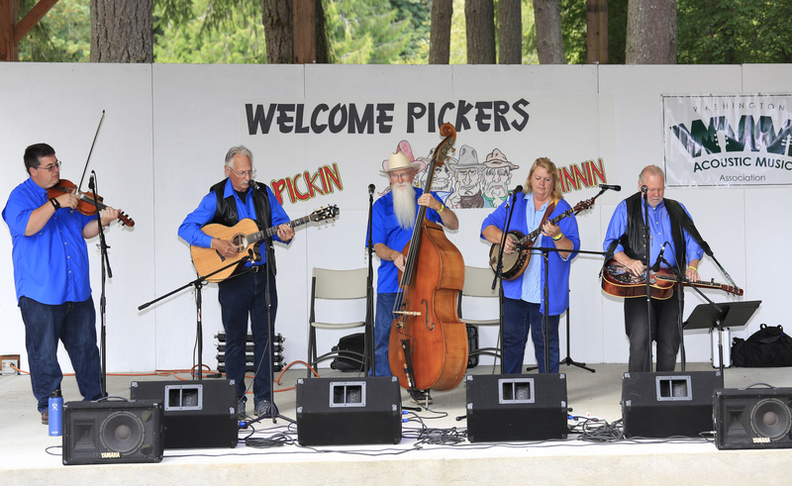 Photo courtesy of winlockpickersfest.com - Pickers performing during the 2018 Winlock Pickersfest.

The 22th Annual Winlock Pickersfest is this weekend and we are so glad to see its return. The event takes place from Friday to Sunday with many different varieties of acoustic music. If you are new or have not been to Pickerfest, you will find a lot of very good pickin' going on.

WAMA, which is the group for acoustic musicians, has been strong in Washington State for many years. Every year, except during the pandemic, they have come to the Winolequa Park to bring music to South Lewis County. This year they are back. Many guests start arriving on Thursday night for camping. Winolequa Park has limited seating so please bring your own chairs. There will also be a concession stand operated by the Little League in Winlock.

Pickerfest offers instructional workshops, genre jams, open mics and plenty of pickin' and grinnin'. This year, if you are not into workshops, they are offering family fun with horseshoe and cornhole games available. There will be something for everyone at the event.

Marv Sobolesky, organizer of the event stated, "Pickersfest is back! I am excited to once again share in the enthusiasm, the love of music, and the prospect of seeing good friends and making new ones. It has been a long two years and it will surely be great to get back into the rhythm of life again."

The different types of music

Our genre jams are extremely popular and very well attended, with some people coming to the festival just to play in the jams. This year's genre jams will include:

Celtic Music Jam
Celtic music is a broad grouping of music genres that evolved out of the folk music traditions of the Celtic people of Western Europe. It refers to both orally-transmitted traditional music and recorded music. The styles vary considerably to include everything from traditional music to a wide range of hybrids.

Old-Time Music Jam
An old-time jam is, naturally, a place where folks get together to play old-time music. "Fiddle tunes" form the bulk of the old-time jam repertoire, but other songs may be played as well. Hundreds, perhaps thousands, of potential tunes are in the Old-Time repertoire. This varies by region, but there are several dozen "standards" that will be known anywhere. Banjos, fiddles, and guitars comprise the primary instruments, but don't be surprised to find someone playing the bass, washboard, spoon, bones, jug, etc. You're bound to find people of all ages, walks of life, and ability levels. The atmosphere will almost always be welcoming.

Choro Music Jam
Choro Music.com describes Choro as:
"Choro, popularly known as "chorinho," is an instrumental genre of Brazilian popular music whose origin dates back to the end of the 19th century in the city of Rio de Janeiro. Choro (pronounced "shoh-roh;" "cho" as in "sho" of "show," "ro" as in "ro" of "rose" when pronounced with a Scottish accent), popularly called chorinho, is an instrumental genre of the Brazilian popular music that has its origins in Rio de Janeiro in the late 1800s. A choro ensemble is called "regional," and a musician, composer or instrumentalist is called "Chorão" (literally meaning "weeper"). Despite its name, this kind of music has, in general, a very vibrant and cheerful beat, characterized by the virtuosity and improvisation of its participants. Choro represents the most typical Brazilian instrumental formation, as well as the longest-standing musical grouping within Brazilian popular music."

With the return of Pickersfest, many new residents will now have the opportunity to listen to some great music, workshops, conversations and fun. We look forward to seeing you there!