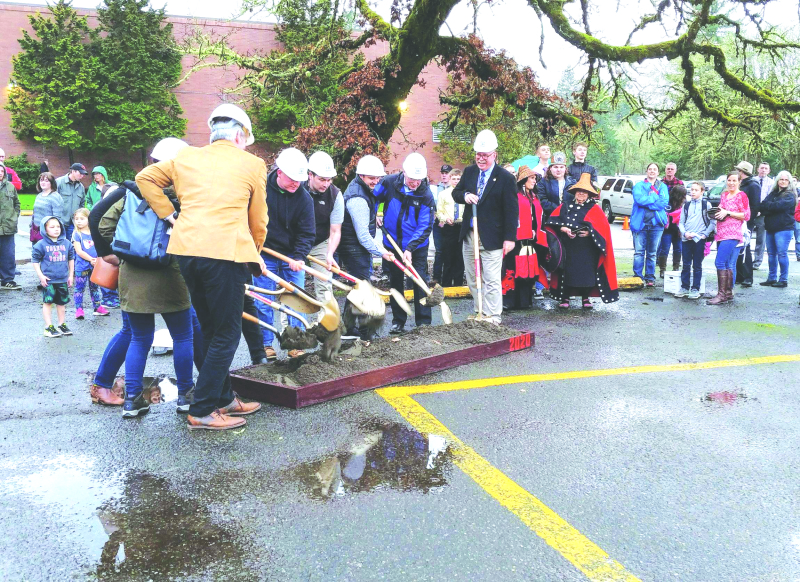 Toledo High School recently had its Groundbreaking Ceremony on the last Friday of January. It began at 4:00 p.m. and lasted for about an hour. They featured many special guests, and all were invited to come to witness the event. It was a ceremony held in the commons dedicated to the rebuilding and remodeling of the new school.

The ceremony started with the National Anthem, and then some opening remarks by Chris Rust about, "honoring the past, embracing the present, and building for the future."

The Cowlitz Tribe performed with drums and their voices, and introduced Patty Kinswa-Gaiser, who spoke about the honor of the Cowlitz sharing this land and traditions with the people of Toledo.

The Toledo High School principal of 1974 Denny Clark had a few words about the past school when it was first being built. He had the crowd do the school's traditional "RAH!"

To, "embrace the present," the school board chairman Jerad Buswell and ASB president Greenlee Clark spoke of their pride for the new school, and how they're honored to be a part of the school district. Wyatt Nef, a Sophomore, made a speech about, "building for the future" along with contractor Ross Parker, who's working on the new school.

Nearing the end of the event was the presentation of plaques, plus the groundbreaking. A couple of groups of people, such as a few students, staff, contractors, and Washington senate members, stood in front of a big planter box full of soil. They each had a shovel, and they stuck it in the soil and turned it, representing the groundbreaking for the new school.

Joe Martin, the pastor at Toledo First Baptist Church, ended the event with a benediction. The groundbreaking event made it to KIRO 7 News, which featured the crumbling state the school is in right now, and the plans for the new building. The new school is supposed to open in 2021, if all goes according to plan.