NAPA a part of the Harbor Community for 40 years 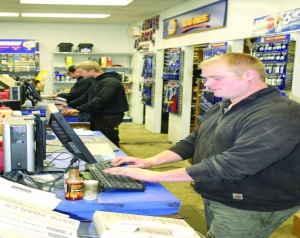 Photo by Scot Pearson Working the counter, Tyson Vaughn, works in the shop making repairs or servicing the vehicles of the community. NAPA has a full crew of ASE certified mechanics to tackle any situation.

After finishing his time at Washington State University with a degree in business administration, the Vaughn’s joined with Bob Nelson and Dale Nelson to create NAPA Auto Parts - Vaughn & Nelson (V&N) Autoparts.

“I have always been interested in cars, dad sold parts for over 60 years,” Vaughn said.

Even after buying out his fathers shares of the company in the mid 1990’s and thinking his father would enjoy retirement, Jim returned to the store and worked until he turned 80.

November marks the 41st year the store will be in Raymond, and for the lifelong resident of Raymond, Vaughn has brought his son Tyson into the business.

“About seven years ago we added the shop,” Vaughn said. “We have been providing full service since then.”

From accelerator pedals to windshield washer fluid, a customer can purchase what they need in the auto part side and then have it added, placed or fixed in the shop side.

Vaughn currently has five employees working both sides of the business.

It was after his son Tyson finished his college time that the shop was opened.

“The shop area had been storage before we converted it into a working shop,” Vaughn said. “It has been the best investment I have made.”

For Vaughn and the NAPA store, Raymond has served as a great customer base and the business is still going strong.

“Times did get tough after Weyerhaeuser pulled out, but that was for everything,” he said. ‘But I just like the automotive industry and I like people. I guess I could have just moved away when times got tough, but you just don’t do that. It’s not easy to just pack up and move, Raymond is my hometown. We stayed and things have worked out.”

Over the years Vaughn has also been involved in the community sponsoring youth sports like soccer and girls softball.

“Things have changed in the area there use to be four car dealers here in town and at least 10 full service gas stations,” Vaughn said. “We have had to adjust to the economy, but we are still going.”

Married for 39 years to his wife Jill, the couple has two boys that are well into their careers.

“Tyson currently works here as a mechanic and my son Jacob works for the Department of Natural Resources,” Vaughn said.

Outside of the family business Vaughn has a couple of other passions that he wishes he had a little more time for. His store office is littered with antlers from several hunting trips that he has been on. “ I am getting a late start this hunting season,” he said. And one of the lifts in the shop has a racecar that he has been working on. “Maybe one day I will get it finished and get it to the drag strip.”

“I have to hand it to my employees, they really have helped with all aspects of the business, from the parts guys, Al (Stiger) and Phil (Robinson) to the shop guys, Travis (Wheeler), Dustin (Howard) and of course my son Tyson.”