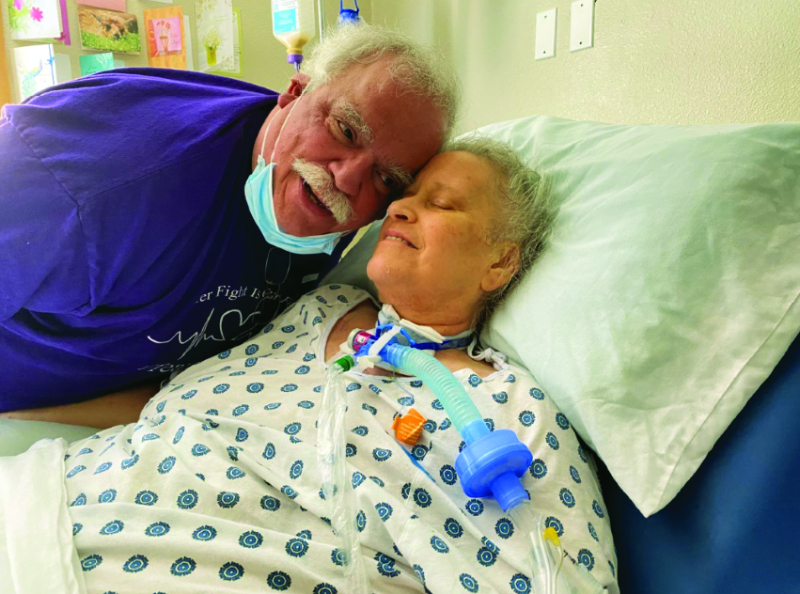 We had planned on doing an update on Nancy Sobolesky's journey, but unfortunately she passed away on Christmas day. So instead, we are paying tribute to a lady who fought a hard battle for many months. She was loved by her family and friends. She received so many cards from the community, she was part of Winlock just as her husband Marv has been.

Marv was open about discussing her journey with us, it is the hope that the journey she had will help at least one person if they see these types of health issues.
"Nancy had a routine surgery in January," Marv said. "It was an in and out kinda thing. About a week or two after this surgery her chest started to get a heavy feeling and she was coughing a lot. We assumed it was pneumonia coming back as she has had that before. Another week went by and she was getting worse instead of better. I took her to the ER at Centralia Hospital. They put her on an IV with antibiotics to help fight pneumonia. About 4 days after that it was still getting worse and she had swelling in her feet. She said she also felt some fluttering in her chest. I took her back to the ER in Centralia and she got diagnosed with aFib. At this point they figured out it was a heart issue. They kept her for 4 days and set up an appointment to meet with a cardiologist in Olympia. I took her to the cardiologist. He said Nancy was in very bad shape and should be in the hospital right now except there were no beds. If anything gets worse, bring her to the ER immediately. They will have to take care of you even if it's in a hallway. I brought Nancy back home. Two days later (on March 14) she got so bad she was barely breathing and fading in and out. I took her to the ER at St. Peters and they admitted her."

I talked to Nancy on March 31. She said "Don't worry. Everything is going to be ok. Tell everyone not to worry, I will be fine."

The Swedish Hospital in Seattle did surgery the following morning. Everything went ok except when it was time to close her up. There was too much swelling around her heart so they couldn't close her sternum. When the surgeon called to tell me, I asked him if he was feeling optimistic. He said "I wouldn't say I'm optimistic. I would say I am hopeful."

They put her in an induced coma and would take her back into the OR every couple of days to clean her chest area so as to ward off infection and check to see if they could close her chest. Finally after two weeks they were able to put her sternum back together and they kept a close watch for infection. Nancy was in an induced coma for 7 weeks, which is hard on everyone, family and friends as well as Nancy.

Her family was limited in visiting due to COVID, Marv stated, "Keep in mind I was not able to see Nancy in person because of visitor restrictions for 2 months. When she started to open her eyes they let me come up and see her in Swedish. She was pretty lifeless, unable to move anything. I counted 33 different lines and bags hooked up to her. Her kidneys had shut down and they had her on dialysis. Her liver was starting to fail. There for about 6 weeks I was getting calls almost every night about needing permission to do this or that. I can't remember the time frame but eventually we were able to communicate with Nancy by getting her to blink her eyes. Once for yes...two for no. One day I was holding her hand and she ever so lightly squeezed my hand. I was ecstatic! I called in the nurse and doctor. They were trying to get her to replicate it but Nancy didn't do it. The following week she did it to me again with her other hand. I knew she was starting to come around. She would track me with her eyes." At this point, she was showing her fight by squeezing Marv's hand.

Nancy would come home on December 22nd, she was to be home for Christmas. In her time in the hospital and rehabilitation center, Nancy became the recipient of the community's love. Marv stated, "The outpouring from the community has been amazing! Nancy received over 300 get well cards, most from the local area but some from worldwide. We are living in a very special community and we should never take it for granted. I can't tell you how many people have reached out to find out what they can do to help. It's really amazing!"

Marv and Nancy would have been married 43 years on December 29th. They spent 43 years together, supporting each other. They were there for each other up to their last day. A love that we will all remember.