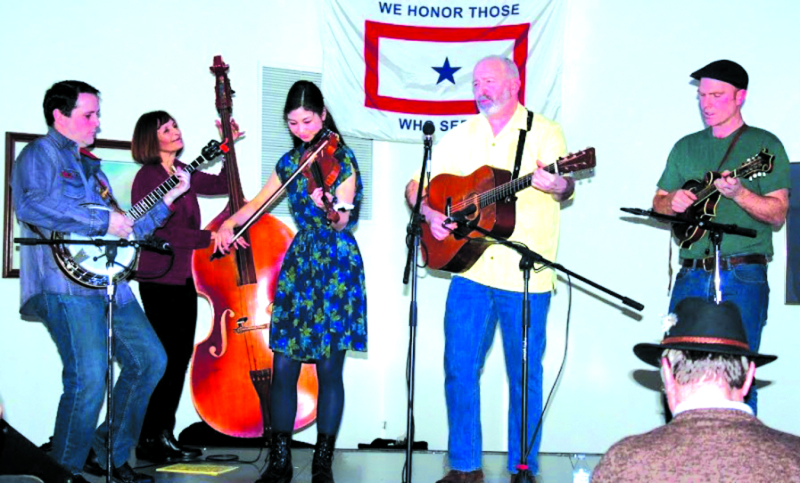 Sammy Adkins & The Sandy Hook Mountain Boys
Sammy Adkins was born and raised in Sandy Hook, Kentucky. Adkins' father bought him his first guitar at the age of five years and he taught himself to play and sing by listening to records of the Stanley Brothers, wanting to play and sing just like his idol, Carter Stanley. Adkins formed his own band in 1970 and played several festivals and indoor shows over the next 15 years, but his big break didn't come until 1986, when he went to work singing lead and playing guitar for Dr. Ralph Stanley. He played four years with Stanley's band before forming the Sandy Hook Mountain Boys, who've continued to play classic mountain-style bluegrass for the past 26 years. The group has appeared a number of times on RFD-TV's "Cumberland Highlanders" program. True to the genre's blue-collar roots, mandolinist Jim Click still works as a pipefitter while bassist James Lowe is a retired coal miner.

CENTRAL VALLEY BOYS
The state of California is home to two bands coming to Toledo this year. One is the Vacaville-based Central Valley Boys, termed by one columnist as "a crazy lazy-susan of talent." As with Adkins, this five-member group has a number of Stanley Brothers tunes in their repertoire, along with songs originally performed by Bill Monroe, Flatt & Scruggs and California legend Vern Williams. Band leader Yoseff Tucker is a two-time Northern California Bluegrass Society Guitar Player of the Year. in 2010 he shared the title of Male Vocalist of the Year. Tucker is joined in the Central Valley Boys lineup by banjoist VIctor Skidanenko, mandolinist John Cogdill, fiddler Peter Hicks and bassist Dave Goodring, who doubles as the band's emcee during shows. The Central Valley Boys have played several shows and festivals in California and Arizona this year, and will perform at a par of festivals in Pennsylvania next month.

FERN HILL
One of two Oregon-based bands performing in Toledo this year, Fern Hill approaches its bluegrass music in the style of the classic bands of the 1950's, resulting in a rhythmic sound recognizable to aficionados and newcomers alike. Paul Smith is Fern Hill's lead singer and rhythm guitar player for Fern Hill. Smith has been playing this music since childhood and has performed with Northwest bands for years, playing guitar and bass fiddle. Other band members are singer-mandolinist Rollie Champe, 5-string banjo player John Van Brocklin, bassist Brett Champe and fiddler Mike Eisler (who has released a solo instrumental CD titled "Lost Tribe"). This will be Fern Hill's third go-round at at the Mount St. Helens event, having appeared in 2012 and 2014. They've become fixtures at bluegrass festivals throughout the northwest and are coming off an appearance last weekend at the Clatsop County Fair in Astoria, Oregon.

THE HOSSETTES
The all-female Hossettes were formed in 2014 and seek to evoke the soulful harmonies and powerful drive of pioneering bluegrass bands. The Davis, California band features Angela Personeni on banjo, Hailey Pexton on mandolin, bassist Katya Polovina, Julie Peet on fiddle (who joined the band last year after original member Jenny Lynn Williams left to form a rockabilly group), and bassist Karen Wilhoyte, who took a most unusual path to discovering bluegrass music. A native of Miami, Florida, Wilhoyte was studying tropical biology in Costa Rica when she befriended a banjo player, who inspired her to learn to play a stand-up bass. She's since switched to guitar. The Hossettes have played mostly in the Golden State over the past two years, including the California Bluegrass Association's Great 48 Jam, a nonstop two-day festival in Bakersfield, and the Father's Day Festival, a Grass Valley, CA event now in its fifth decade. This will be their first appearance in Toledo.

WHISKEY DEAF featuring ANNIE STANINEC and JOHN KAEL
The other Oregon band coming to Toledo, Whiskey Deaf returns after gaining so much favorable notice at Mount St. Helens a year ago that they performed a sold-out concert in February at the Veterans Memorial Museum in Chehalis. WBA president General Cothren of Winlock says this is the first time he's brought in a band two consecutive years. "People loved them," says Cothren, "and wanted them back this year. It was an easy decision." Whiskey Deaf is centered around fiddler-singer Annie Staninec and guitarist-singer John Kael, both Portland-area residents. Staninec won an IBMA Momentum Award last year, has toured nationally and has played with Rod Stewart's band at Caesar's Palace in Las Vegas this summer. Kael has been performing, recording and teaching bluegrass and traditional music for nearly 20 years, and is also an established songwriter; his award-winning song "Handmade Cross" is on the Grammy-nominated album "Hard Game of Love" by Doyle Lawson.