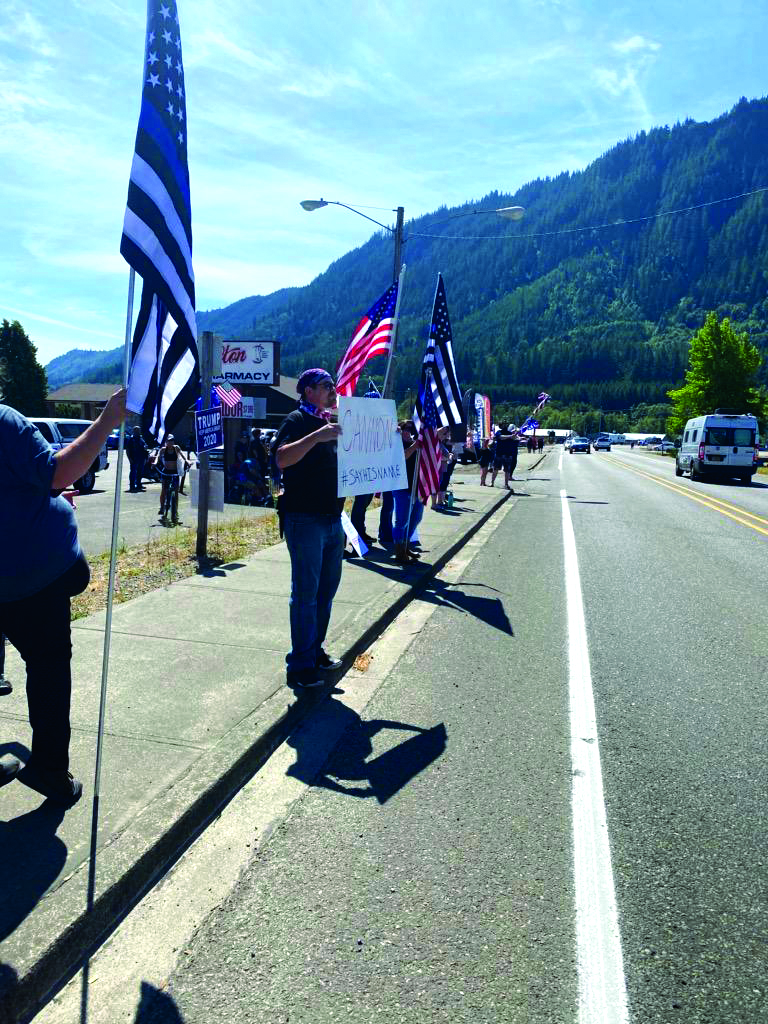 Participants at the Freedom Rally in Morton lined the street.

On Sunday, August 16, Lewis County residents gathered for a Freedom Rally and Back the Blue event in Morton, Washington. Approximately 600 people gathered in Morton to show support for the Morton Police Department, law enforcement and first responders.

At the beginning of the event, people showed up, parked their vehicles and brought out their flags. The streets were lined with patriots and there were many driving around. During the rally, Black Lives Matter (BLM) held a counter protest with about half a dozen in attendance.

When BLM protesters showed up, they were at first at the high school, but very few people were there. Black Lives Matter protesters then changed their location to where the patriots were, on the opposite side of the street. Patriots stood there with their flags and signs, as did Black Lives Matter, there were no riots or violence.

Kay Thompson, a BLM protester stated, "My mom sent me to the store to get ice cream and it looked interesting. The guy in charge doesn't believe in non-binary people and I am a non-binary person. I support BLM because they agree with me." No other members would speak to the media, the only comment received was "it's all on our signs." Their signs read "Defund Police" and "Abolition=Freedom."

Commissioner Edna Fund was at the Freedom Rally and stated, "While walking the Morton streets today, it was gratifying to see all the flags celebrating our freedom. I also had the opportunity to see an individual with a Trump hat and shirt giving water to the Black Lives Matter group, with the temperature reaching 100. In return, the BLM gave the individual a flower. That's what America is about - dialoguing about differences in a peaceful manner. Good job, Morton!"
Law Enforcement was also on hand throughout the event, Morton Chief of