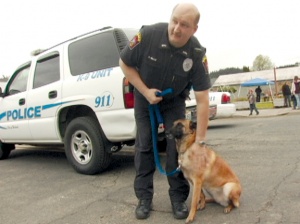 Winlock has bid farewell to drug enforcement duo Officer Steve Miller and K-9 Misha, who have both moved to the Upper Skagit Tribal Police Department.

Miller’s last day was Sunday and Police Chief Terry Williams said the resignation of his employee of five-and-a-half years is feeling more like the loss of a partner.

During his career, Miller was involved in high-profile investigations and pursuits, including the March 11, 2012, capture of two Olympia murder suspects after a violent chase down I-5. He has also been lauded informally such as when resident Ed Richards thanked him for proactively removing squatters him his property during the Aug, 8, 2011, Winlock City Council meeting.

Williams said Miller had informed Winlock of his imminent departure in December, but decided to stay with the department through the holiday season to be sure not to leave a heavy workload for the other officers.

Now in Northern Washington, Miller will be performing his normal drug enforcement duties with Misha, who was declared surplus by the Winlock City Council during their Jan. 14 meeting. Williams said he expects to receive around $2,000 in exchange for Misha, less than half the $5,400 Winlock paid for her three years ago.

“They do depreciate because of their age,” said Williams of law enforcement K-9s. “We realize that there was grant money that was used to purchase her and also a lot of donated funds to equip the vehicle and everything. So, we felt that we should at least get something in return to put back to the city, back to the community.”

At this point, Winlock does not have plans to acquire another K-9 but does plan to retain the specially-equipped vehicle formerly used by Miller, stated Williams. The search for another full-time officer is also under way, with Williams stating Winlock has been actively seeking applicants throughout January.

Despite Miller’s departure, the 2013 Police Reserve Academy is still anticipated to begin in Winlock next month, though Miller had been expected to teach a tactical driving course. Williams said a replacement instructor has been located and the academy is expected to begin on time.

Williams added he cannot tell how long the next full-time officer will remain with the department, as it is difficult for small cities like Winlock to remain financially competitive.

“It varies,” said Williams of department turnover, stating some officers such as current Toledo Police Chief John Brockmeuller, who spent 14 years with Winlock, are able to remain in the area longer than others.

Until a new officer is hired, Winlock can still expect police coverage, but the whole region will be without an effective and widely-renowned K-9 for the time being.

“She [Misha] was very good at what she did,” said Williams.
Read more from:
TC - Police, Fire and EMS
Tags:
None
Share: