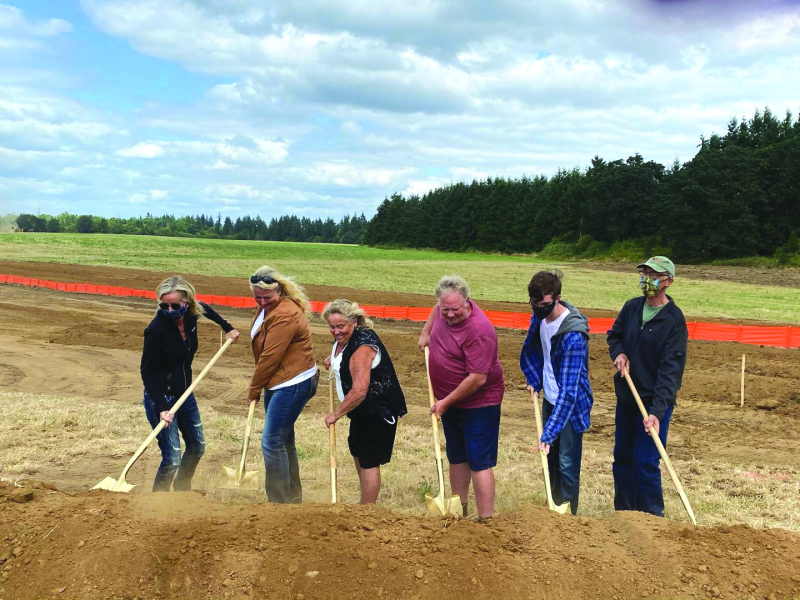 The groundbreaking ceremony on Mickelsen Parkway was this past week. It is the beginning of something new but we can't talk about the Parkway without talking about the Mickelsen family. The Mickelsen family have been a part of Winlock for over 100 years and we are blessed to see a road named after them for all future generations to remember.

Paul and Hannah Mickelsen came to Winlock in 1914, they had three children Victoria, Walter and Douglas at the time. Then in 1918, Clayton was born, soon to follow was Mildred, Pauline and Arlene.

Paul worked the land and in 1939 Clayton bought the original 90 acres that became the Mickelsen Dairy, as we all knew it. Clayton was married to Mayme.

Clayton grew the farm into 200 acres. He was a quiet man and a hard worker. He was always out working in the dairy, taking very little time off. A former neighbor of Clayton stated, "Clayton was a very generous neighbor, he would stop and help you plant seeds or loan you a tractor whenever you needed it. They were the best neighbors you can have." And this is exactly how the family has been, the best.

Clayton and Mayme had three children, Clinton, Dennis and Sue. All graduated from Winlock High School and all were involved in the dairy. Clint and Dennis worked on the dairy, as did Sue's husband Bill Lindeman. Sue was an educator with the Winlock School District. Bill and Sue Lindeman, lived in the home on the dairy, Dennis and his wife Linda, lived next to the dairy and Clint and Sonja lived in Toledo. Family farming was a 24-hour job, living on or near was part of the job.

Over the years, Mickelsen Dairy employed around 40 people. They would employ high school students and locals who understood hard work. One of their former high school employees, Retired Lieutenant, Mike Titus of the Redmond Fire Department stated, "I worked for the Mickelsen Dairy in high school and through my college years. Having Denny, Bill and Clint as my first bosses was a great experience. They were always interested in us as young employees and created a real family experience. Thank you, Mickelsens, for a great start to my working career, it was lots of fun." Mike worked for Mickelsen Dairy in the 1970s and 1980s.

The Mickelsens continued to operate the dairy until 2005, when they moved the operation to Eastern Washington. It was sad to see it go, but at that time, it was clear development was coming.

The Mickelsen family has been very patient waiting for this development. It started approximately 20 years ago, talk of development, then in 2006 the Urban Growth Area was expanded to include the Mickelsen property. When Benaroya purchased the land, nothing happened for the longest time. The economy slowed down and any further development was on hold.

Then, Lonnie Dowell became mayor, the county was interested in getting this development off the ground. It's important to remember, this could not happen without the Mickelsen family. The road runs right through their land, land they donated for the community with hopes of increasing jobs. Clint Mickelsen did not get to see the development take off. His daughter Shelly Mickelsen said it best, "Dad didn't get to see all the jobs this is going to create, that's what he wanted." Even though they do not own the land where the development is going, they still wanted to see their land used to create jobs, and jobs will eventually be created.

The Mickelsens have been working with Lewis County during the development, Commissioner Gary Stamper stated, "I have known the Mickelsen family for decades. They are an integral part of Winlock's growth and culture. They have given tirelessly to the community for years, through jobs and now acreage for the road. Without the Mickelsen family, the Benaroya project would have never gotten off the ground." This is so true, they have given to the community and they still are.

The groundbreaking was an important one, the family showed up to show support once again. Commissioner Edna Fund stated, "How many groundbreaking ceremonies have I been to where the former owners -- farmers who had tilled the soil -- were present. This was my first! The Mickelsen family from the wives/daughters/grandson had shovels in hand. What a memorable day as the county/city/Mickelsen/Benaroya partnership provided a bright light for Lewis County future economic development!"

I have known the Mickelsen family my entire life, I grew up going to the same church. To see a family such as theirs, a real family who has always treated each other with love and respect is rare. They were youth directors, bosses, friends and a teacher, all to give back.

When you pass the road and see the name Mickelsen Parkway, I hope you remember what the name really stands for. It stands for hard work, integrity and humble beginnings and most importantly community. Thank you to the Mickelsen family, we couldn't have done it without you!