Mayor Bradshaw dishonest on the record 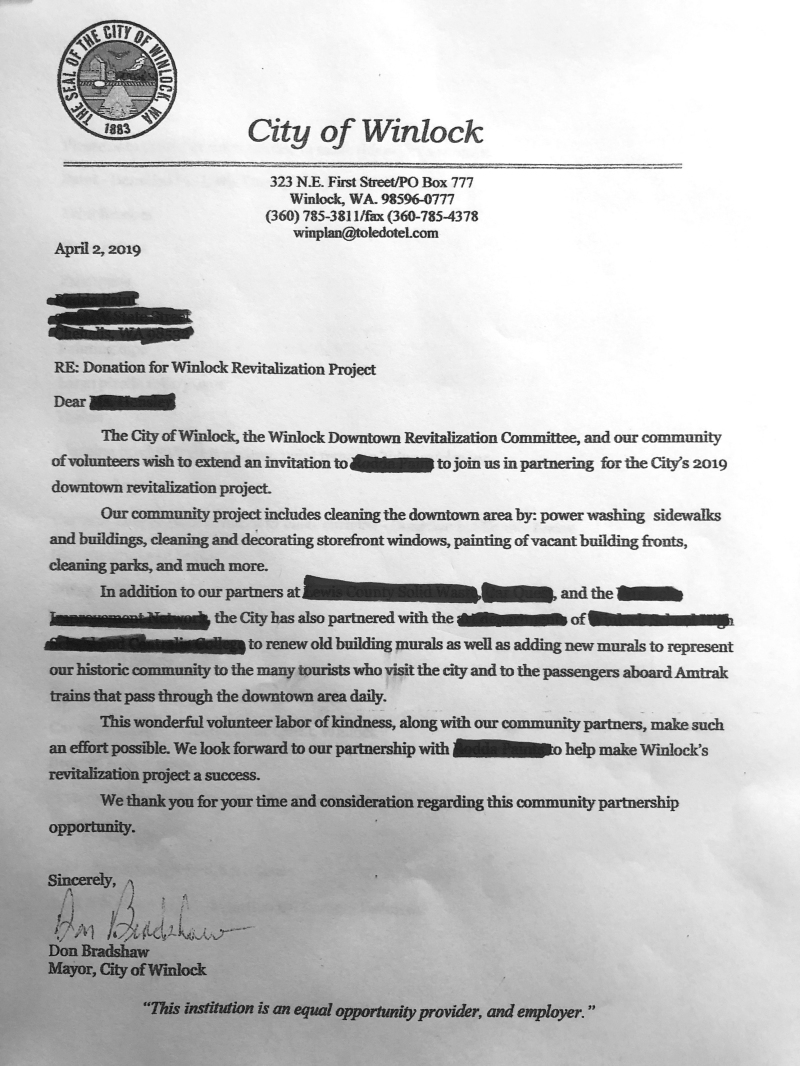 Mayor Bradshaw seemed to be in a lot of trouble this past week, first he lied on the record not once but twice. He denied the existence of a letter on city letterhead and the use of city resources for a project. Then, Lewis County Public Health and Social Services sent him a violation for illegally dumping dirt at the end of Jones Road without a permit. That's not the worst part, the dirt slid down the hill and fell into a fish bearing stream which means the Department of Ecology is now involved.

The Winlock City Meeting on April 22 seemed to go on like business as usual, but what occurred after should concern every citizen in the City of Winlock. Mayor Bradshaw lied on the record about the existence of a letter that was written on city letterhead, then asked for the letter back so he could "destroy" the evidence.

The letter was never mailed or used, so the Mayor had no reason to lie.

The last item on the agenda during the city council meeting was "correspondence" about a letter that was received from a local 501c3 stating that the city could not use their name. Mayor Bradshaw stated "I didn't understand it, so I never responded to it because I simply do not know what they are talking about so that's where I left it."

Anne Randt then asked about the letter being on city letterhead. Mayor Bradshaw stated "There was no such letter, that's why I was confused, at first I was angry, but we never wrote such letter. Doesn't exist, I don't know either Anne, I was dumbfounded." He didn't lie about the letter once, he lied about it twice and without hesitation. Mayor Bradshaw was adamant that no letter existed.

City Attorney, Erin Hillier went on to explain that the city could not be involved in such a committee and that the letter was probably just a "rumor." She also stated she knew about the program and it was a volunteer program. It was not a volunteer program, it was at the direction of the mayor.

The committee member who has the letter was disturbed by the actions of the Mayor. He has taken the letter to the Prosecuting Attorney office and had it entered into public records so it could not be destroyed. The Town Crier is publishing the letter so citizens also see proof of its existence.

A committee was formed for the revitalization for downtown Winlock, the problem was, no citizens or business owners were included, everything was being done in the dark, again. All of the information was kept from the citizens and the committee consisted of city council members Connie Sneed and Barbara Pedersen, along with Jenifer Slemp from the city and an area resident, but no residents from the City of Winlock. Again, it appears as though everything is done without any knowledge of the citizens by the city council and the mayor. It was brought up by City Council member Sneed several times but no details were ever given.

The City of Winlock is also in trouble by illegally dumping dirt from the waterline project on Hwy 505. The city dumped several loads of dirt at the end of Jones road, where it slid down the hill into a fish bearing stream. The city sent out a press release stating they are working with Department of Ecology and Lewis County, but could not do any work until the area dries. The violation to the city from the county states "no grading shall be performed without first having obtained a permit therefore from the building official." In the public records request the Town Crier received from the city, no county permit was included but a city employee was grading the dirt on Saturday, April 27, 2019.

The dumping of dirt which falls into a fish bearing stream is usually not a slap on the wrist. The actions required by the county alone are to meet with "Lewis County Community Development for a Master Site Review - determine subsequent review, actions or permits necessary for compliance." They are also to complete erosion control or remove all fill material. This is only for the site on Jones Road. If the city fails to do this within 30 days, they could be fined $257 each day per the violation. This is minor though the Department of Ecology will be determining the damages to the stream. Why the Mayor chose to illegally dump dirt without a permit is alarming.

The City of Winlock has a history of not obtaining permits in a timely manner. The City knew a permit was needed to grade and fill the parking lot on 1st and Front street. The permit for the city was issued approximately 2 months after they started clearing the lot. The Town Crier received a copy of the parking lot permit that states the lot will eventually be used for single family homes. The parking lot lease is yearly, the city has already spent over $5,000 alone not including city resources. If this is what is planned, then the city is using city funds to level a private individual's lot for development.

The Town Crier reached out to Mayor Bradshaw who has not commented at the time of publication. He refuses to address issues publically.