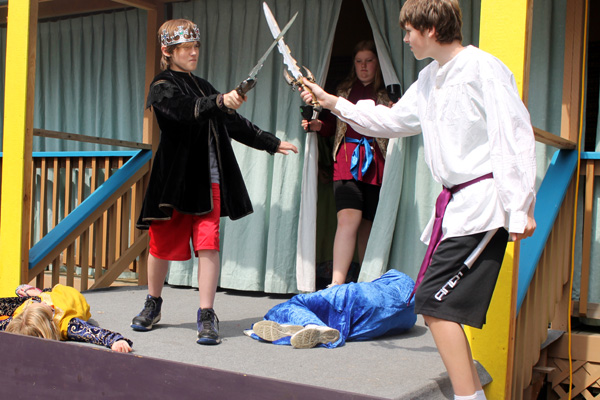 Students a with the Morgan Arts Centre's Children's Theater Workshop perform a humorously-abbreviated version of Hamlet, which cut past much of the drama and made quick time to the death scenes.

The Morgan Arts Centre was bursting with kids this last week for their 14th annual Children's Theater Workshop, taking several days to teach youngsters from across the region the finer points of acting and stagecraft.

Open to students 8 to 18 years of age, organizer Di Morgan said the program was filled past capacity with registrations by July 1, and says the popularity of the camp comes from the fact that all kids participating (35 this year) will get a chance to fill at least one starring role.

"We want every kid to have a bigger experience," she said, adding students were split into four groups led by a number of volunteer teachers and students directors, who themselves were once actors in the program. "We have these kids who have gotten to the point where they're grown up, but they still want to come."

Productions this year were quite varied, including a retelling of Norse mythology (the theft of Thor's hammer), a western about a cowpoke named Lightning Larry, a spoof on The Wizard of Oz involving Disney princesses receiving guidance from Dr. Phil, and an abbreviated version of Hamlet (with noted apologies to William Shakespeare).

Morgan said the scripts themselves are primarily written by the teachers and directors beforehand, but students added their own "idiosyncrasies" to the stories and dialogue.

Of the kids participating this year, a majority were returning students who said they like coming back because it is an opportunity to develop their talents and passions for theater.

"I love acting and I've been acting all through grade school," said 11-year-old Hallie Sciera.

"If you come to this camp, it's pretty likely you're going to get a big role," added 10-year-old Nina Scheder.

Many other students were giving the program a try for the first time, some with little to know acting experience under their belts. For the kids who may be a little nervous about getting our on stage, 8-year-old Raegan Lester said her best advise would be to act in front of their parents first to get used to performing in front of a live audience.

And perform they did on Friday night, in front of an outdoor theater of family and friends. Though tickets were free, the kids did prepare and sell concessions, raising $288 to be split between all participants.

"The people that come are always really generous," said Morgan.

The next Children's Theater Workshop is expected to begin next summer, and those interested in trying it out are encouraged to sign up early, as slots fill up quickly. For more information, call (360) 864-4ART, or visit www.morganartscentre.com.