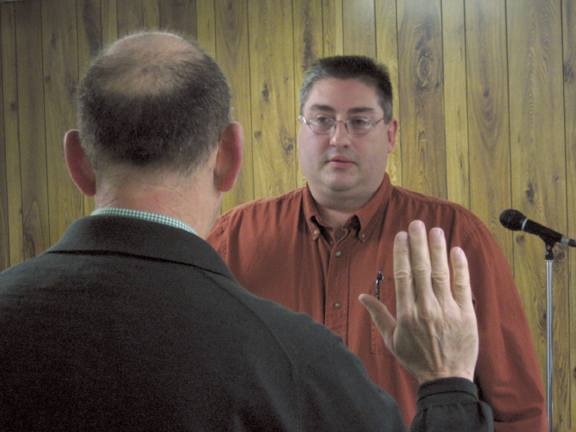 Winlock Mayor Lonnie J. Dowell was sworn in Dec. 23 and is expected to hit the ground running when his term begins Jan. 1.

Dowell said he has already spoken with union representative Mike Werner, of Teamsters Local 252, when the two met at a recent council meeting. Dowell said he intends to promptly present a finished contract to the council, though he admitted he is unaware of specific union issues as such negotiations have taken place outside of public forums.

But Winlock’s future with CIAW is uncertain, as Dowell has spoken with Cook about the city’s options in returning to AWC for services. When the council voted to change to CIAW they stated it was in an effort to save money, but Cook opposed the move, having served at the time on AWC’s Risk Management Service Agency Board.

Cook informed Dowell after his swearing in that, though it will be one year before Winlock is allowed to leave CIAW, AWC does not allow cities to return until after three years except in certain cases, and Cook stated he could use what sway he still has to find an exception for Winlock.

Dowell joined Council Members Aaron Mummert and Samuel Patrick while being sworn in that night, all of whom are holding elected office for the first time in Winlock. The three had also been serving on the Planning Commission, a five-member board made of appointees from the mayor, and Dowell said it will be his goal to fill those vacancies soon so Planning Commission business can continue uninterrupted.