Students from Toledo High School (left) and Onalaska High School (right) form their offensive and defensive lines Friday night during the first powderpuff football game between the two. Initiated by students from Toledo, they said Onalaska had been their opponent because they were the only local high school who said they were available for the game, with players later stating they would not mind seeing other schools becoming involved in the future and possibly forming their own league.

The Onalaska Loggers beat the Toledo Indians 14 to 12 Friday night during the first-ever powder puff football game between the two schools.

Organized largely by students, players said they came up with the idea for the game in response to Toledo High School's Mr. T competition, a pageant spoof held for the senior boys annually, stating they wanted an activity unique to the senior girls.

Toledo senior Jessica Kelly, who spearheaded the efforts, said a similar game was attempted last year, but failed to gain traction. However, with enthusiastic participation from Onalaska, the 2015 Central 2B League Exhibition Powder Puff Football Game was a go.

"Hopefully it's an annual thing," said Kelly, adding the evening was not just for sport and entertainment but also fundraising for the senior classes of each school.

"A lot of us got heated," she said of the aggression players began to show shortly after the game started, but said they learned to tone it down as the game went on and were "all still friends."

According to the referees, the normal rules of football--or flag football, to be specific--applied during the game, except the clock would continue without stopping, except for time outs. Other, more whimsical rules were also in place to remind the audience and the girls the game was just for fun, such as a requirement for each team to perform a unique victory dance after each touchdown (failing to do so would result in the team being penalized).

The game itself started off a little slowly as each team, made of players largely unfamiliar with football, got the hand of running plays and grabbing at flags rather than tackling, with both Toledo and Onalaska scoring touchdowns by the first and second quarters, respectively.

As the half began, Toledo recovered their own kickoff and scored another touchdown, bringing the store to 12-8 (Onalaska was the only team to complete their conversion play after a touchdown at that time).

The third quarter ended with Onalaska less than 10 yards from the goal line, and the fourth quarter began with a swift touchdown from the loggers, who missed their second conversion play and brought the score to 14-12.

Front then on, both teams aggressively fought to keep the other from gaining yards and, after multiple turnovers and a couple of fumbles, Toledo found themselves first-and-goal with 29 second left. It wasn't no longer an exhibition match, or a just-for-fun skirmish down the gridiron, at that time. Fans were cheering, flags were streaming and, after some aggressive attempts for the goal line, Toledo just could not make it within four downs.

While celebrating with her team, Logger Running Back Jamie Jo McLaughlin, whose numerous rushing yards plays helped secure Onalaska's victory, declared team work had been the source of their win.

"I couldn't get through the line without my line," she said.

The girls from both teams then spent the evening celebrating a successful powder puff game at McDonalds, with girls from both schools saying they are eager to see the new tradition continue next year, and even expand to include other local schools. 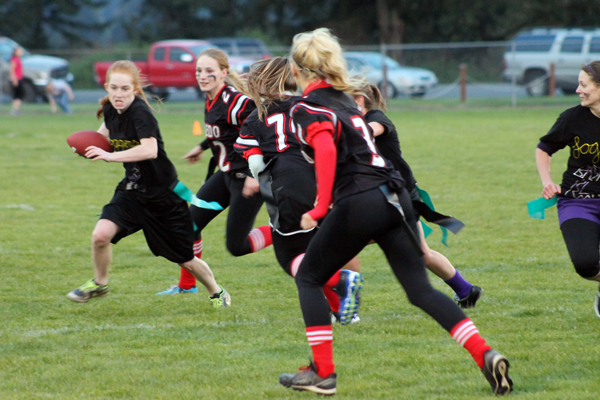 Rushing plays, such as this one executed by Onalaska Quarterback Staci Vent ( far left) were common fare during the game and resulted in some significant gains for both teams, though players, many of whom were new to football, were often reminded they could not pass the ball after calling a rushing play, or vice versa. 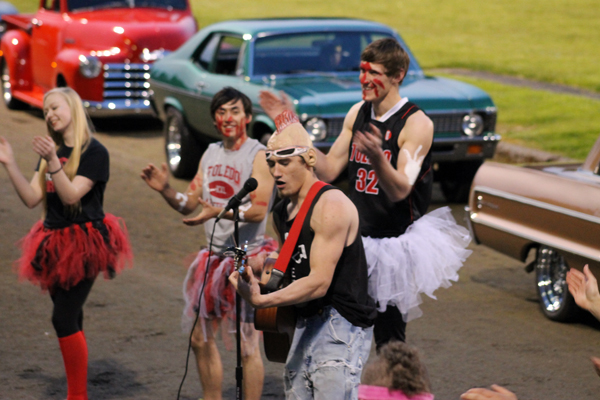 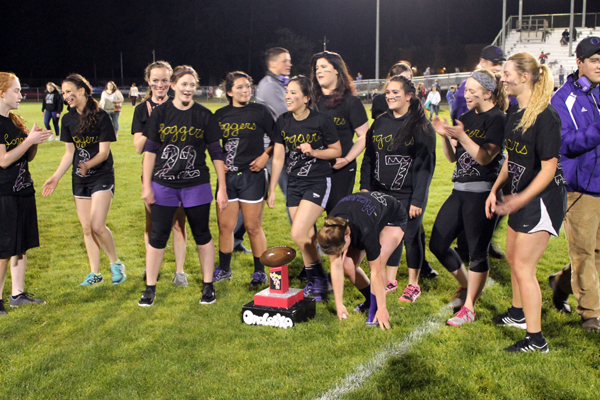 The Loggers celebrate around their trophy, which had been specially designed for the game and is intended to be awarded to the winner of next year's powder puff game, which students said they are eager to organize.