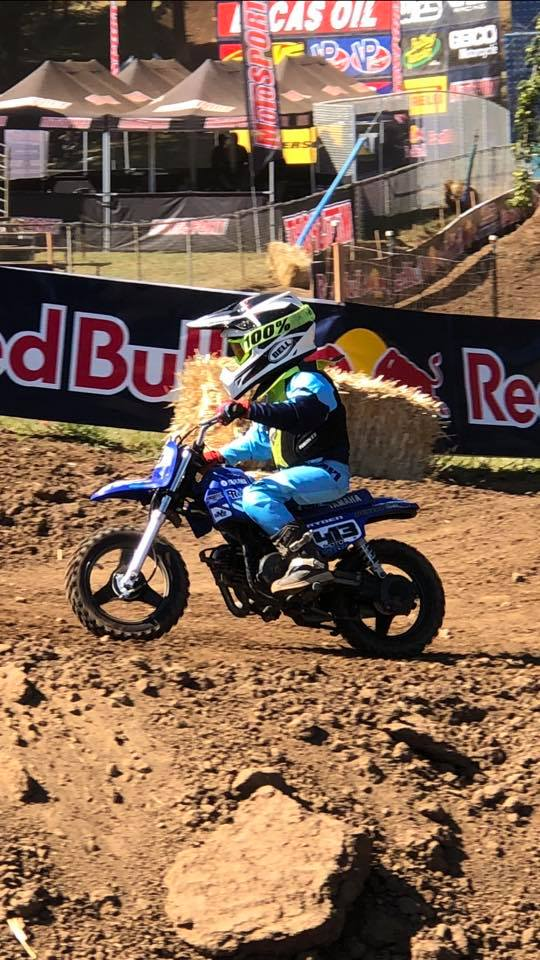 Ryden Porter, 6-years-old, qualified for the largest amateur motocross race in the world.

Vader Washington's, Ryden Porter just made his dream come true. The 6-year-old dirt bike racer has qualified for the largest amateur motocross race in the world, the 37th Annual Rocky Mountain ATV/MC AMA Amateur National Motocross Championship, presented by Lucas Oil, to be held this August at the historic Loretta Lynn Ranch. Porter took on over 22,000 hopefuls from across America to earn one of just 1,446 qualifying positions.

"The Amateur National at Loretta Lynn's is the best of the best motocrossers in America and around the world, said Tim Cotter," Director of MX Sports. "Just being here makes you an elite racer and a top athlete. A solid finish at Loretta's would give you instant National recognition and a possible professional career."

Porter, who attends Castle Rock Elementary just graduated kindergarten, he has been riding dirt bikes since he was 2 years old, and racing since he was 4.

Ryden's dad, Travis, has been riding dirt bikes since he was 10 years old.

With the help of sponsors such as Motographix, MVPgraphics, Bell, Answer, PNWCobra, CP Racing Team, ProTaper, and Pinnacle Suspension who help with gear and entrance fees to the races, Porter has had the opportunity to pursue his dreams. He has placed top 5 in many races in the last 2 years and competes nearly every weekend at Washougal, Woodland, Gig Harbor and Portland International Raceway. Porters have built their own private track to practice on.

Porter will make the long journey to Hurricane Mills, Tennessee along with his parents Travis and Whittney, and newborn baby sister Emersyn, and aunt Shelby Morrison. The race runs July 30 through August 4. Porter and his family will be camping onsite for the week long event, and will participate in many non-racing evening activities.

Porter is just one of the over 22,000 racers across the country who spent the last four months qualifying for the event. The top finishers in Area Qualifiers and Regional Championships earn a gate position in the National Championship race at Loretta Lynn's. Racers may enter a wide variety of classes, from minicycle classes for children as young as four, all the way up to a senior division for riders over 50. There are also classes for women and classes for both stock and modified machines. In total, there are 35 different classes of competition. Porter will compete in the highly competitive 4-6 50 cc limited class in which only 42 riders nationwide have been invited.

Porter qualified for the Loretta Lynn Regional June 15th in Washougal. He was cheered on to the finish line after his bike motor blew up, pushing it through the triple jump and uphill to the finish line. Many spectators on Facebook are posting about how determined this youngster was and how inspirational to see this type of perseverance. Some were seen with tears in their eyes as he crossed that finish line and the reassuring proud hug from his dad.

The track is built on a section of Loretta Lynn Ranch and Campground in Hurricane Mills, Tennessee. The course contains a variety of jumps, corners and other obstacles designed to test the skills and stamina of the racers. The motocross track is used only once a year for motorcycles, so there is no hometown advantage. Racers compete in three 15-20 minute races over the course of the week per class, sometimes in grueling temperatures. Proper training and preparation are paramount.

Most riders attend the event with the help of their families. In fact, many consider the event their family's summer trip, nicknaming it the "World's Greatest Motocross Vacation." Besides the races, the week long event hosts many family-friendly activities, including swimming, talent show, concerts, and live entertainment.

The race action will be broadcast live daily at www.RacerTV.com, July 30 through August 4, for a total of 40 hours of live coverage. In addition, two highlight shows featuring the event will air on NBC Sports Network in the fall.