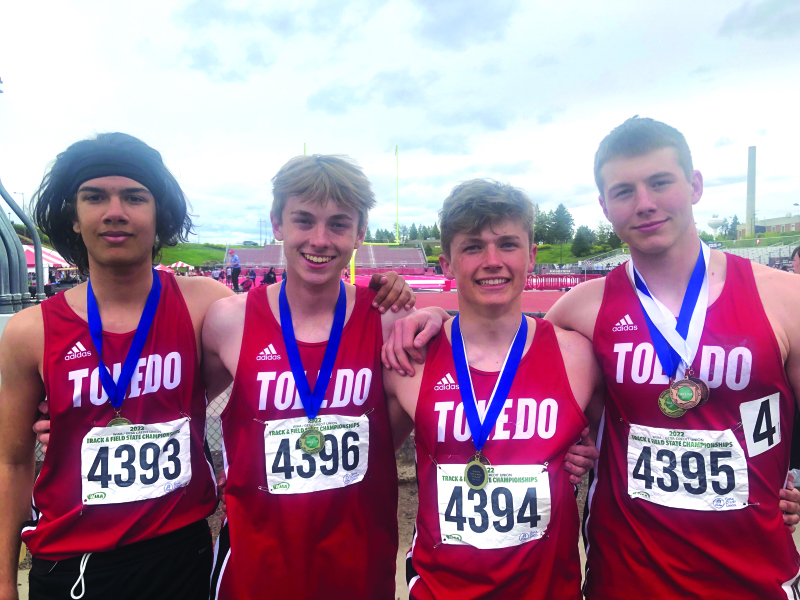 Toledo Boys won the Washington State Championship for the 4x400 relay. Winlock athlete Cali Schofield won 3rd place in the Long Jump. What a successful week for the athletes in our area.

The weekend started for Winlock athletes on Friday, May 27 at 1:25 p.m. the Winlock High School and Middle School students created a tunnel that the Winlock state track members ran through. Then after, they went to Winlock Miller Elementary where they were escorted by the Winlock Police and a couple of vehicles from the Winlock Fire Department. There is something special about seeing the students and coaches escorted by emergency personnel.

The excitement didn't end there. Once they got to the state track meet, the athletes did their very best and each school brought home a medal.

Cali Schofield, who placed 3rd in the Long Jump for Winlock High School, won her jump at 16.1'.

Grady Fallen stated before they left for state, "This has been a very successful season with several athletes leading to state in their mark. This is a huge accomplishment as district 4 and the central 2B league is one of the toughest leagues in the state. Watch out for Toledo's 4x400 relay team, who is the favorite to take 1st place!" His prediction was right, they took first!

Winlock head coach Eric Low stated before state, "We are excited and proud of our kids." Mrs. Collins who is the field coach stated, "These kids have worked so hard to get this far. I am so proud of these amazing athletes."

Athletic Director Nick Bamer stated, "We're incredibly proud of our athletes and coaches. They represent our school and community so well while competing -- it's a major source of pride within the athletic department. I have no doubt our athletes will continue to rise to the occasion and perform well at State this week.

It was a successful weekend for both schools, each school has something to be proud of.