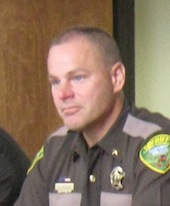 The Lewis County Sheriff's Office is hoping to name a new jail chief in the not too distant future, following the resignation of Chief Kevin Hanson.

Hanson left after more than 25 years with the agency at the end of August to take a job as head of the jail in Mason County.

"We're still searching. We've met with some people," Sheriff Rob Snaza told the Town Crier. "We should have something out in a couple of weeks."

In the meantime, Lt. Chris Tawes has been promoted to acting captain and is currently overseeing the facility.

Undersheriff Wes Rethwill said Hanson went to Mason County to help them with the issues he's already dealt with at the Lewis County Jail, where he was chief for six years. Mason County is, for example, looking to build a new jail, something Hanson has experience with, Rethwill said.

"The unfortunate thing is we lost a lot of institutional knowledge," Rethwill added.

Sherrif Snaza indicated a meeting is scheduled this week with the Civil Service Commission to talk about permanently filling the captain position, which has been vacant since Capt. Jim Pea retired last year.

The Lewis County Jail, which has an average daily population of around 200 inmates, continues to struggle with vacant corrections officer positions. The facility brings in over $1 million a year in revenue from law enforcement agencies, both inside and outside the county, who use its accommodations for their arrestees.

The sheriff's office administration has been talking with county commissioners for months about the desire to contract with a new entity for medical services at the jail, and the intricacies surrounding one of its most cost intensive responsibilities.

During his time at the Lewis County Jail, Hanson was part of the team which helped design and oversee the construction of the new jail, completed in 2003. He has served on the Washington Association of Sheriffs and Police Chiefs Jail Accreditation team.

Chief Hanson partnered with others to create the Mental Health Alternative, a post-sentence treatment program designed to address mentally ill persons with a high rate of recidivism in the criminal justice system. He currently serves as a board member of Cascade Mental Health Services.

Hanson's departure came just two weeks before the resignation of another chief at the sheriff's office. Chief Deputy Stacy Brown who headed the special services bureau, took a job as chief of police services at Evergreen State College in Olympia.