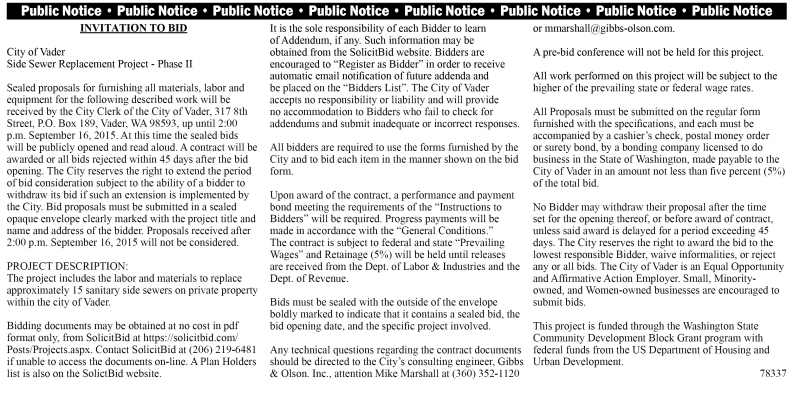 Sealed proposals for furnishing all materials, labor and equipment for the following described work will be received by the City Clerk of the City of Vader, 317 8th Street, P.O. Box 189, Vader, WA 98593, up until 2:00 p.m. September 16, 2015. At this time the sealed bids will be publicly opened and read aloud. A contract will be awarded or all bids rejected within 45 days after the bid opening. The City reserves the right to extend the period of bid consideration subject to the ability of a bidder to withdraw its bid if such an extension is implemented by the City. Bid proposals must be submitted in a sealed opaque envelope clearly marked with the project title and name and address of the bidder. Proposals received after 2:00 p.m. September 16, 2015 will not be considered.

PROJECT DESCRIPTION:
The project includes the labor and materials to replace approximately 15 sanitary side sewers on private property within the city of Vader.

Bidding documents may be obtained at no cost in pdf format only, from SolicitBid at https://solicitbid.com/Posts/Projects.aspx. Contact SolicitBid at (206) 219-6481 if unable to access the documents on-line. A Plan Holders list is also on the SolictBid website.
It is the sole responsibility of each Bidder to learn of Addendum, if any. Such information may be obtained from the SolicitBid website. Bidders are encouraged to "Register as Bidder" in order to receive automatic email notification of future addenda and be placed on the "Bidders List". The City of Vader accepts no responsibility or liability and will provide no accommodation to Bidders who fail to check for addendums and submit inadequate or incorrect responses.

All bidders are required to use the forms furnished by the City and to bid each item in the manner shown on the bid form.

Upon award of the contract, a performance and payment bond meeting the requirements of the "Instructions to Bidders" will be required. Progress payments will be made in accordance with the "General Conditions." The contract is subject to federal and state "Prevailing Wages" and Retainage (5%) will be held until releases are received from the Dept. of Labor & Industries and the Dept. of Revenue.

Bids must be sealed with the outside of the envelope boldly marked to indicate that it contains a sealed bid, the bid opening date, and the specific project involved.

Any technical questions regarding the contract documents should be directed to the City's consulting engineer, Gibbs & Olson. Inc., attention Mike Marshall at (360) 352-1120 or mmarshall@gibbs-olson.com.

A pre-bid conference will not be held for this project.

All work performed on this project will be subject to the higher of the prevailing state or federal wage rates.

All Proposals must be submitted on the regular form furnished with the specifications, and each must be accompanied by a cashier's check, postal money order or surety bond, by a bonding company licensed to do business in the State of Washington, made payable to the City of Vader in an amount not less than five percent (5%) of the total bid.

No Bidder may withdraw their proposal after the time set for the opening thereof, or before award of contract, unless said award is delayed for a period exceeding 45 days. The City reserves the right to award the bid to the lowest responsible Bidder, waive informalities, or reject any or all bids. The City of Vader is an Equal Opportunity and Affirmative Action Employer. Small, Minority-owned, and Women-owned businesses are encouraged to submit bids.

This project is funded through the Washington State Community Development Block Grant program with federal funds from the US Department of Housing and Urban Development.