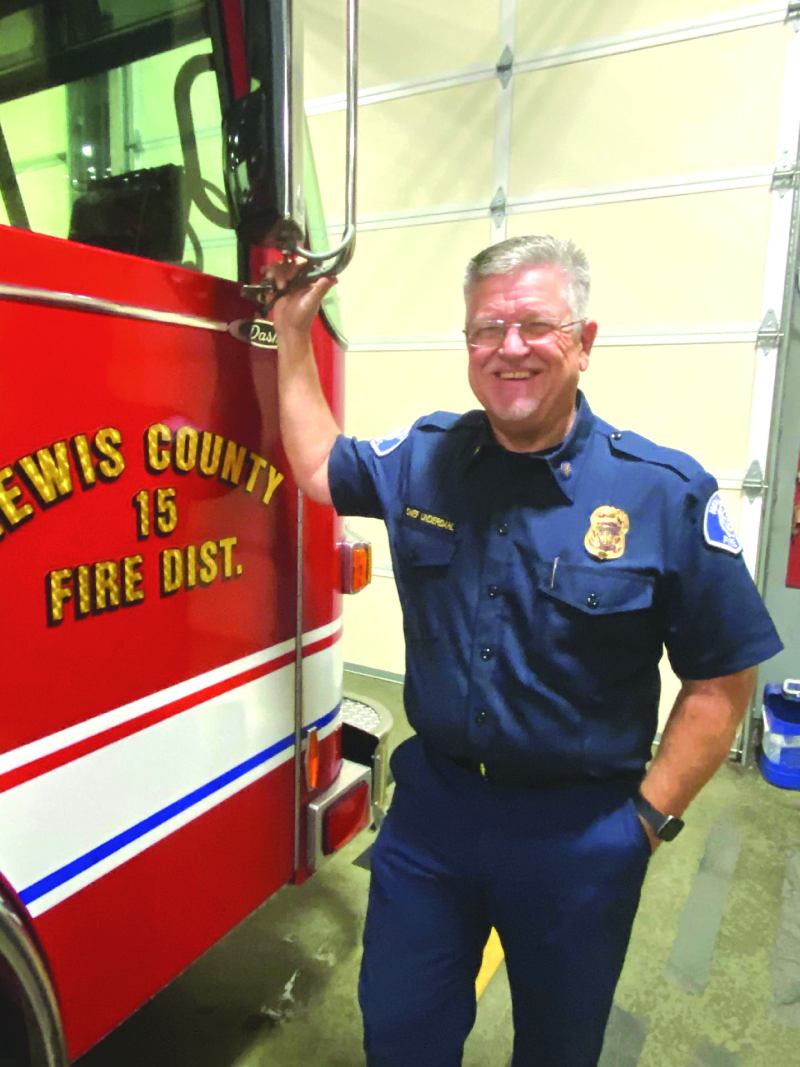 Lewis County Fire District 15 has a new fire chief and he is familiar to some in the area as Vader Ryderwood Fire Chief as well as Winlock now. Richard Underdahl has accepted the position and Winlock is better off with him around.

Underdahl has been interested in being a firefighter for decades, first he became a police officer and now a fire chief. "I actually became interested in becoming a firefighter way back in the 1980's when I was a police officer in Oregon," said Underdahl. "I wanted to join the local volunteer fire department, but they weren't accepting any new members because they were full up. They had a 2-year waiting list on getting into the department. Volunteering was a lot different back then. When I moved to the Vader area in 2003, I went down to the fire department, but there wasn't anyone around to talk to about joining. I met Terry Williams in 2007 and he had asked me to become a fire commissioner due to a vacancy they had, and I accepted. I also joined the fire department as a volunteer as well. I really enjoy it and I feel that it is a great way to help people. My main desire to be in public service is to help." With his friendly attitude, he will be great to have on scene. He will make sure he is helping with the fire and any occupants.

Chief Underdahl isn't a career firefighter, but he does have 10 years of experience in Vader as their chief. "I originally started in the Vader fire district in 2007 as a fire commissioner and a volunteer," said Underdahl. "I was then asked by the board of commissioners to step away from the board and accept the Chief's position in 2011 during the merger with Ryderwood. I've been the chief there since then and now the chief in District #15. I will still be the volunteer Chief of Vader-Ryderwood."

The south county firefighters have always backed each other up, they have been on scenes together, he was familiar with Winlock. "Recently, I was asked by both the Winlock membership and commissioners to accept the chief position, but I had to think about it," Underdahl said. "I began to think about the offer more and was humbled that I was asked to take it. I had a lot of travel in my previous job that encompassed the 13 western states and being home on a more consistent basis was appealing. I did like the challenge that the Chief's position offered and decided to take them up on their offer."

Goals are an important part of any job, Chief Underdahl has set his goals to begin with. He stated, "My main goal is to keep the high level of service that the department offers now. We are very fortunate to have an excellent group of paid and volunteers in our organization. My other goal is to make sure that the public is aware of where their hard-earned dollars are being spent. It is our responsibility to ensure that we are fiscally responsible for the tax dollars that are allotted to us, and we use them to the maximum benefit of the agency and constituents."

Underdahl also understands what a leader must be, he knows he must have a level of professionalism as well as organizational skills. Underdahl continued, "The Chief is the leader of the organization. My main way that I lead is by example. I would never expect to have to direct someone in a task that I'm not willing to do or have done in the past. I believe in getting my hands dirty and doing the most basic of things. I also expect a high level of professionalism and pride in appearance. Chief is the liaison between the members of the department, the board of commissioners and the public. The chief is responsible for everything in the department no matter what happens. The responsibility is the sole ownership of the chief either good or bad. Open communication is the key between all areas. I am very open."

Chief Underdahl has a very approachable attitude, he is only here to help the community, he felt this was very important to convey. "I would like to thank the voters of District #15 for voting for the increased amount in our general levy," he said. "This increase allows the district to hire three more Firefighter/EMTs to add to our full-time staff. We are in the process of hiring the three right now and anticipate them being on duty the first of January once the new budget year kicks in."

Commissioner Pennington is excited about their choice, he stated, "The district hit one out of the park with Chief Underdahl, his leadership, his knowledge and experience gives us excellence at the helm of our district as we sail forward to a bright future."

Commissioner Kistler knows the assets Chief Underdahl brings, he continued, "Commissioners Randy Pennington, Jerry Craft and I, as well as the staff of LCFD 15 Winlock, are looking forward to working with our new Chief, Richard Underdahl. He brings a wealth of experience and leadership and a proven record of accomplishment to the department. Chief Underdahl is up to the challenge of dealing successfully with the change and rapid growth we are seeing in our district. He is well respected by emergency personnel in our county, and we are fortunate to have him as our Chief."

There is absolutely no doubt that Underdahl is up to the task to be Lewis County District 15 Fire Chief. More importantly though, Underdahl is very knowledgeable and has a warm personality. If you have not met Chief Underdahl, stop by the fire station and introduce yourself. You can tell when you walk into the fire house that the feeling is one of, we are ready and we are happy.