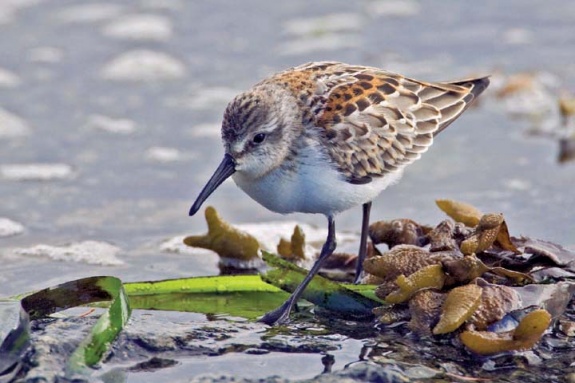 A Western Sandpiper is among many of the migratory birds available for viewing along the Washington Cost late in the summer and early in the autumn. Such birds are headed south to escape the winter months and may sometimes be joined by Asian birds.

As summer is drawing to a close, shorebirds are anticipating the season's change. Tens of thousands of them - sandpipers, yellowlegs, dowitchers and other species - are already flocking to Washington's coastal areas en route from their Arctic breeding grounds to points south. Clouds of shorebirds, especially sandpipers, can now be seen from Ilwaco to Ocean Shores.

Unlike their spring migration, shorebirds' flight south is a disorderly affair. Adults often leave the Arctic before their chicks are fledged and join flocks departing at different times. They also travel at a more leisurely pace, departing as late as October. Rare birds, such as off-course Asian shorebirds, are more likely to join the others in their southward flight than on their trip north.

Late summer is a great time to watch the parade of salmon, steelhead, shad and other fish pass the fish-viewing windows at the Bonneville Dam Visitor Center. Thousands of fish are now on display every day as they move up the fish ladders to continue their journey upriver.

Salmon and steelhead are also on the move. A record 434,000 upriver bright fall chinook salmon are expected to pass through the fish ladders at Bonneville Dam this year, and many of them will make that journey this month. Thousands of coho and summer steelhead will be passing by the viewing windows at the dam too.

To get to the visitor center, take Washington State Highway 14 east to Milepost 40 (about 5 miles from Stevenson) and park in front of the glass building at the end of the powerhouse. To check on the number of fish passing the dam each day, go to the U.S. Army Corps of Engineers website.