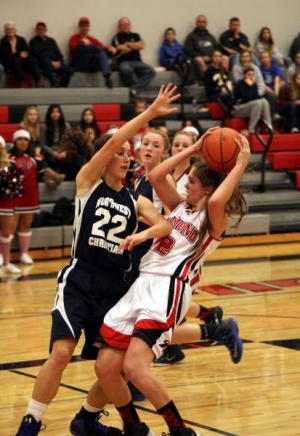 Photo by Scot Pearson Lady Seagull Mikayla Collins gets tangled up in the Northwest Christian defense.The Seagulls took the game 54-15.

Just before the holiday break, as South Bend was holding the Lighted Boat Parade, the Lady Seagulls hosted the Navigators from Northwest Christian and took them down the hardwood winning 54-15.

It is possible that the basketball rims at Raymond High School might need calibration, as during the game between the Lady Seagulls and Navigators, the basketball hoops kept rejecting the teams' attempts at making a basket.

The low scoring first period was filled with pressured attempts to pass the ball in heavy traffic, missed passes and referees calling a large amount of pushing violations.

"They are a tall team, and at first I think the girls got a little nervous," said Raymond coach Jon Schray.

With the first period generating single digit scores for both teams, they both initially scored from the foul line. A Winter Newman three-pointer followed on by a bucket from the open floor, giving her five for the game, the Seagulls started their game with a six-point advantage after the first eight minutes of play. In addition, with the discovery that the Seagulls could fly through the Navigator towering defense, the scoreboard started to open up and the rims allowed a few additional Raymond points.

"We just didn't get the rebounding that we needed," said Northwest Christian coach Rick Thomas.

As the Raymond offense kept slicing through the Navigator defense, the Seagulls did not allow Northwest Christian many opportunities as their game of quick steals and working the advantage over jump ball situations started to produce points through the second period. Raymond's full-court press aided them in making the Navigators hurry their game plan and provide several opportunities to steal the ball away running the length of the court and a quick two.

The Lady Seagulls were successful in keeping the Navigators from taking any double digit time periods' holding them to the most at five points per period.

"Raymond was real aggressive and beat us to the ball," said Coach Thomas.

Northwest Christian did not back down and continued to try their game against the Seagulls. At one point, the Navigators sent three different players to the foul line capitalizing on Raymond fouls and generating one-point for each try from the foul line. But that alone was not enough to make up for the gap that Raymond had created and continued to build on through the remainder of the game.

Raymond also took the lead advantage to work their bench providing several players time on the court to continue to build depth for the team.

For the night Seagull Karlee Freeman, having to change her jersey because of a cit finger, led the team with 24 points. Aiysha Garcia dropped seven and Maddi Murray came away with six for the team total to include the final basket at the buzzer that ended the game.

The win brings Raymond to 7-0 for the overall season, with several schools in the 2B Pacific League only playing six games at the most so far this season.

The Seagulls will host their New Year's Classic on Dec. 29-30, see the full schedule in a related story in the Willapa Harbor Sports section.