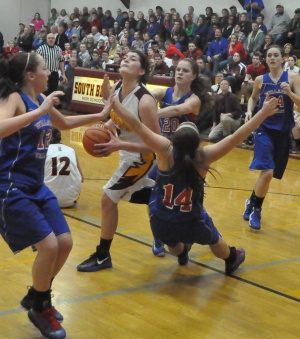 SOUTH BEND – South Bend used its superior height advantage and Katlyn Sawyer pumped in 18 points and tore down a dozen rebounds to lead South Bend to a 50-37 thumping of Willapa Valley in a physical, turnover-filled game before a crowd of about 325 Saturday night at Koplitz Field House.

With the win, South Bend pulled into a tie for second place with Valley in the Pacific League. Valley (12-7, 8-3) closes out the season against league champion Raymond (18-1, 11-0) Wednesday at Seagull Gym, while South Bend (10-9, 8-3) hosts Naselle (2-14, 2-9). The second place team gets a first round bye at the District IV tournament, which starts Tuesday, Feb. 6. at Montesano and Rochester.

“Unfortunately, it was a frustrating night for us offensively – especially in
the second half,” Willapa Valley HS Head Girls’ Basketball Coach Melissa Aust told the Herald. “We didn't shoot the ball well at all and didn't crash the
boards offensively to give us the second chance opportunities that we
needed. Our shooting is either hot on fire, where we can knock down some
amazing shots or we are stone cold, and unfortunately tonight we were
cold. We got the looks we needed; they just wouldn't fall. We committed too
many turnovers tonight, also; many unforced and just bad passes on our
part.”

The game featured seven ties and seven lead changes in the first half. The game was tied 15-15 after one quarter and 26-all after two quarters. Both teams threw the ball around like it was greased with oil; South Bend had 11 first half turnovers and Valley had nine.

Michaela Huber, Abbee Bannish, and Brooke Harden were each saddled with two fouls in the first quarter, which wrecked havoc on Valley’s offense.

“Michaela sat almost the entire first quarter and some of the second as well and we need her on the floor,” Aust said.

“South Bend got several close shots inside that first half as they ran a
high post and snuck a low post cutter in behind us and we just didn't
defend that cut very well tonight,” Aust said.

Valley scored the first six points of the third quarter and then allowed South Bend to rattle off 14 in a row. The Lady Indians led 40-32 after three quarters. Cearns swished a trey to end the frame.

“We stayed calm and controlled the tempo in the second half,” South Bend Coach Gary Wilson told the Herald.

The Lady Vikings scored the first four points of the fourth quarter and then scored only one point the rest of the game. Valley couldn’t hit the broad side of barn in the second half. South Bend ended up with 23 turnovers and Valley had 19.

“Kaitlyn Sawyer played solid for South Bend; she killed us on the boards and snuck in behind our defense down low several times,” Aust said.

Makenzie Russell was a force off the glass for SB with 15 rebounds and Sierra Cearns scored 11 points and did a good job of directing the offense under a lot of duress from Valley’s guards.

Solid shooting and balanced scoring proved too much for Northwest Christian during Willapa Valley’s 65-39 pummeling Thursday night at Tenoski Gym in Menlo.

“The first four minutes started off okay; our girls really amped it up
and went on a 12-0 run the last 2:52 of the first quarter,” Coach Aust told the Herald. “Defensively, the girls played very well, not letting Northwest Christian’s height hurt us and the pressure we put on their guards bringing the ball down the floor created a lot of steals and turnovers. This was another team win where everyone contributed and that's when we're at our best.”

“Emily Fluke and Brooke Harden played well off the bench offensively,” Aust added. “I thought our posts did a great job considering Northwest Christian’s posts outsized my starters by about seven to eight inches.”

Willapa went in front 17-4 after one quarter and was in front 35-15 at halftime. Northwest Christian won the third frame 12-11 but Valley came back strong to outscore its guests 19-12 in the final eight minutes.

Christian slid to 11-6 overall and 6-4 in the Pacific League.

Sawyer shot in 19 points and pulled down 14 rebounds to carry South Bend to a 37-34 road victory over North Beach Thursday night at Oyehut.

Sawyer tallied six of South Bend’s eight points in the fourth quarter and North Beach missed a trey at the buzzer that would have sent the game into overtime.

“North beach gave us all we could handle,” Coach Wilson told the Herald. “This was a game where we had to keep our composure especially when things were not going our way. We were down by three  with three minutes left and just kept our cool down the stretch. “We did a good job working the ball into the post when we had to. Katlyn and Myranda did a great job inside for us,” Wilson said. “Emily Sanchez had a good floor game both at guard and on defense.

“I am very proud of the girls to keep working hard through this game this is the first game in two weeks we have had everyone back on the floor and I think we are still in the recovery stage,” Wilson added.

The game was knotted at 14 after one quarter and after an anemic offensive display by both teams in the second stanza, NB led 18-16 at halftime, The Lady Indians outscored the Lady Hyaks 13-8 in the third panel to take a 29-26 lead. Both teams scored eight points in the fourth quarter.

“We took the lead by one with one minute to go,” Coach Wilson reported. “Sierra put us up by three with a pair of foul shots with 17 seconds left on the clock.”

North Beach dipped to 9-10 overall and 3-8 in the Pacific League.