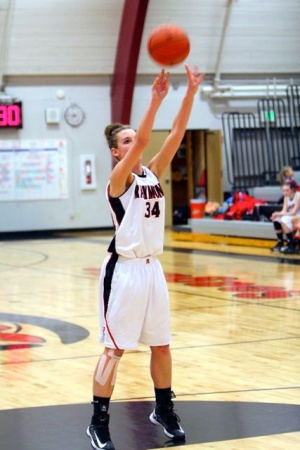 Raymond clinched the Pacific League championship by crushing Northwest Christian 49-40 Saturday night at Lacey. It was the 18th straight win for the Lady Seagulls of head coach Jon Schray.

Raymond received a stiff challenge from the stubborn Lady Navigators, who are usually a stiff opponent in their own gym.

“They came out strong on defense,” Schray told the Herald. “We had to make some adjustments and get our focus back in order to maintain the lead. Northwest Christian really played well, and we now have some new areas of focus to make us better for the playoffs.”

Raymond led just 6-5 after a low scoring first quarter and was up 19-15 at halftime. The Lady Gulls led 29-23 heading into the fourth frame and then outscored NC 20-17 in the final eight minutes.

“They came out pressuring us really hard and we had to adjust and deal with it,” Schray said. “It came down to our free throw shooting that saved us.”

Raymond (18-1, 11-0) has the opportunity to finish the Pacific League season with an undefeated record at home Wednesday night against rival Willapa Valley (12-7, 8-3). The Lady Vikes (13-6 and 9-2) entered Tuesday night’s final league game in second place. The second-place team receives a first round bye at the District 4 tournament, which opens Feb. 6 in Montesano and Rochester. Raymond opens district action Feb. 9.

“I am very happy with the way our season has gone so far, but we will not be satisfied with our regular season run until we beat the Vikings here on Wednesday,” Schray told the Herald. “I know they will be ready for us…I love rivalry games.”

Maneman scored her 1,000th career point and Raymond won for the 17th straight time after burying Naselle 49-11 Thursday night at Seagull gym. Maneman, a senior, is only the 12th player to score 1,000 points in RHS girls’ basketball.

“Abby scoring 1,000 (points) was a great personal achievement for her,” Coach Schray told the Herald. “As I have heard her Dad tell me, in sixth grade she looked up at the record board outside of the gym and said that she would one day be on that board. She is a very driven and gifted athlete, but she also maintains a certain amount of humility that belies her age.”

The Lady Seagulls held the Comettes to two points in the first half. Raymond led 18-0 after one quarter and 28-2 at intermission. The Lady Gulls shot 40 percent from the floor on 19 of 47. Raymond’s defense held NHS to 10 percent shooting (4 of 40).

“We were a little slow to get started on offense, but our defense was just in the right spot on this one frustrating their guards and stagnating their offense,” Schray said.

“The Beavers did a much better job handling our press this time around, but our size and experience won out,” Schray said.

Shylo Boyes banged in 11 points and Garcia chalked up 10.

Raymond led 19-4 after one quarter and held THS scoreless in the third panel. Tenino is 0-14 on the season.