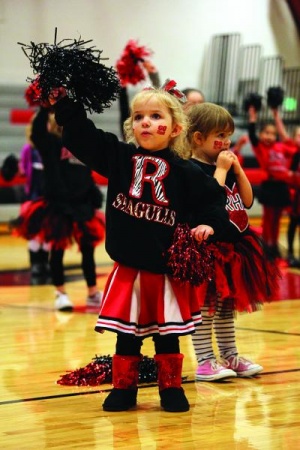 Indiana Enslow, age 3, works the routine to the Vanilla Ice hit "Ice Ice Baby" along with a court full of youth cheerleaders. The showcase of Raymond Spirit was the final performance of the Youth Cheerleader Camp where would-be youth come to see what it m

Another 2B Pacific League Girls Basketball game played out in Raymond on Jan. 16, as Raymond hosted Chief Leschi and dominated the game 51-11. But the score was of little consequence to the visiting Lady Warriors; they took it more of a lesson in how a team should be.

"Our strategy started well before the game tonight," said Warrior head coach Kurbis. "We wanted to try and limit their scoring to about eight in the first period."

The Warriors were successful on that point ending the first period down 9-0, but it would be catch-up the rest of the night.

"We switched up our defense and whenever we do this the team just slows down a bit. We kept a press on them to keep us moving," said Raymond coach Jon Schray.

For Raymond it is another win and for senior Seagull Aiysha Garcia it was a career moment while taking down her 500th rebound.

Garcia was also one of two Lady Gulls making the double-digit scoring with 12 points in the game; with Karlee Freeman topping the list at 18.

Even with the Seagulls outpacing the Warriors in every facet of the game, coach Kurbis was able to show his growing team a fine example of sportsmanship and community during their time at Raymond.

"There are little things that they do here at Raymond, and my team sees that. I have been coaching for 34 years, and my hat is off to the school and the community in what we saw tonight.

Some of those little things that impressed the coach and his young Warrior team, was the way the community came out to Friday night's game in support of their team and associated activities that made the evening a special one.

During introductions of the teams, the Warriors were impressed with the spotlight introductions given to the home team. As the teams let out for their halftime break and the floor was a mass of youth in a display of support and cheer as the Youth Cheerleaders took over the court and provided routines from their recent cheer camp.

"They do it all here, I bet they have great things happening in the hallways here. It is a great thing for this community," said Kurbis, "Hats off to Raymond."

The Warriors are rebuilding their team with only eight girls in the program last year. Kurbis, in his second year with the Chief Leschi program, now has 18 girls.

Their win was a 45-28 victory over North Beach earlier in the season and came within seven points in their loss to Ocosta.

During the game at Raymond, Keyanna Blue contributed their team high scoring with 6, two other Lady Warriors each contributed a pair of points; KamRon Horseherder, Shaiana McCloud and from the foul line Delores Stafford picked-up a single point.

The Warriors were also successful in the final period, only allowing Raymond as many points as in the first.

Chief Leschi will be traveling before their next home game against Tacoma Baptist and will visit Willapa Valley on Jan. 30.

The Lady Seagulls are on the road with Valley on Jan. 22 and Montesano the following Saturday. Raymond returns home to face North Beach Jan. 27 and stay to host Tacoma Baptist Jan. 30. The South Bend game is scheduled for Feb. 4.