Lady Gulls open season with a rash of wins 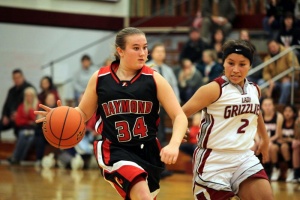 Starting early in December, the Lady Seagulls first took games over 1A Elma and Hoquiam, and traveled to Ocosta to drive their initial league win over the Wildcats.

Entering into the first game of the season, Raymond hosted the Eagles from Elma and outscored them three of four quarters of play. It was a close call going into halftime as the Lady Seagulls edged the Eagles by a score of 32-31. The third period would be one of the big deciders to the game as Raymond guard Karlee Freeman ramped up her game and was able to convert steals for points on several plays leading the Raymond point barrage 18-5 over Elma.

The Eagles tried to keep pace but were unable to match the continued solid effort of the Gulls giving Raymond a 10-point lead at the finish.

The Lady Seagulls did not have much time to celebrate as they took their game on the road to face the Grizzlies of Hoquiam two days later.

Trailing after the first quarter, the Seagulls brought the game to a tie by the half. The teams were almost evenly matched throughout the game going back and forth with the lead, Hoquiam again edging Raymond by three points after the third period.

Adding insult to injury, Seagull leading scorer, Freeman, had to sit out the majority of the third period due to foul trouble. Likewise, Hoquiam had several players also under threat of fouling out late in the game.

As the fourth quarter progressed and both teams played with caution, Raymond was able to gain back the lost points and take a small lead. The game went to the wire with Hoquiam coach Mark Maxfield working the clock taking strategic timeouts. With Hoquiam pressing in the final seconds, the Lady Seagulls were able to keep them from scoring and securing their second win of the season.

The road game at Ocosta looked easy for the Lady Gulls keeping the Wildcats to single digits in every quarter of play. And it makes the Raymond team 3-0 so far this season.

This week's match up should be one to watch as the teams are just starting to get in their groove.