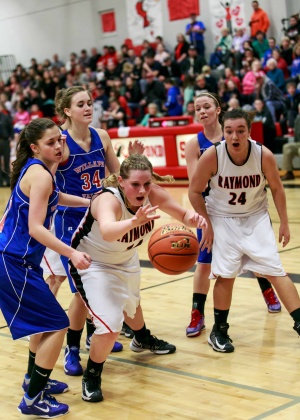 Shilo Boyes dives to make a save against Valley last week.

SEAGULL GYM – Raymond “persevered” against Willapa Valley and finished the season with an unblemished record in the Pacific League. It was the 19th straight victory for the Lady Seagulls, who had already clinched the league championship January 26 on the road in Lacey. A determined Raymond team turned back Valley 53-45 last Wednesday at Seagull Gym. Raymond celebrated the title by cutting down the nets after the game. The Raymond boys were also crowned champions (Jan. 29 in Menlo), which marked the first time both teams won the title in the same year since 1992.

“This team is really made up of good kids and I’m really proud of them,” Second-year RHS head coach Jon Schray told the Herald. “It’s exciting. This is a team that has four kids averaging nine points or better and they are a very unselfish bunch that works hard. We really stepped up the conditioning this year and they don’t complain. We worked on defining roles and what it takes to be a winning team and they buy into it. It’s been a fun year. I’ve really enjoyed every day at practice. The coaching staff has been really great to work with.

“Winning the league championship and going undefeated in the league means a lot to all of us,” Schray told the Herald. “It was one of the first goals we set out to do as a team at the start of the season. We felt we were in a place to do it and we knew what we were capable of doing and we did it. It’s definitely a nice bonus to win the league with an undefeated record.”

Raymond, 19-1 and ranked fourth in the state by Associated Press, heads to the District IV tournament as the No. 1 seed from the Pacific League. Raymond (12-0 in league) opens district action Saturday versus the winner of Napavine/North Beach. Raymond’s only loss this season was the season opener at Napavine (45-34).

As a result of their loss to RHS, the Lady Vikings (12-8, 8-4, third in league) lost a first round bye and must play today against the Central No. 6 team.

Against Valley, Schray received good balanced scoring and another clutch performance from his ace in the hole, Abby Maneman, who scored 19 points (12 in the fourth quarter). Maneman was 5 of 11 from three-point-land, pulled down five boards, gave out four assists and stole the ball three times. Maneman nailed three treys in the pivotal fourth quarter.

Courtney Hagain and Hailee Williams (6 off rebs) threw in 10 points and made three steals apiece, and Aiysha Garcia came up with eight points and seven rebounds. Shylo Boyes grabbed nine rebounds for RHS, which tore down 18 offensive rebounds.

“We started out really tight and kind of wound up against Valley,” Schray told the Herald. “And it didn’t help matters that Valley started off really well. We had to battle back out of it and we finally relaxed and played our game in the fourth quarter. They definitely put a lot of pressure on themselves because they wanted to be undefeated and Valley played like they wanted that shot at being second in league. I can’t say enough about how we persevered. I’m really proud of they way they persevered the whole game.”

Raymond found itself trailing 9-8 after the first quarter and tied at halftime (25-all). The Gulls led 35-32 after three stops and then outscored their guests 18-13 in the final frame. Valley scored the first eight points of the game. Williams’ trey finally enabled RHS to lead for keeps in the third quarter. Raymond’s biggest lead was a dozen late in the game.