Kathy Chastain, a lady speaking up against Winlock annexation 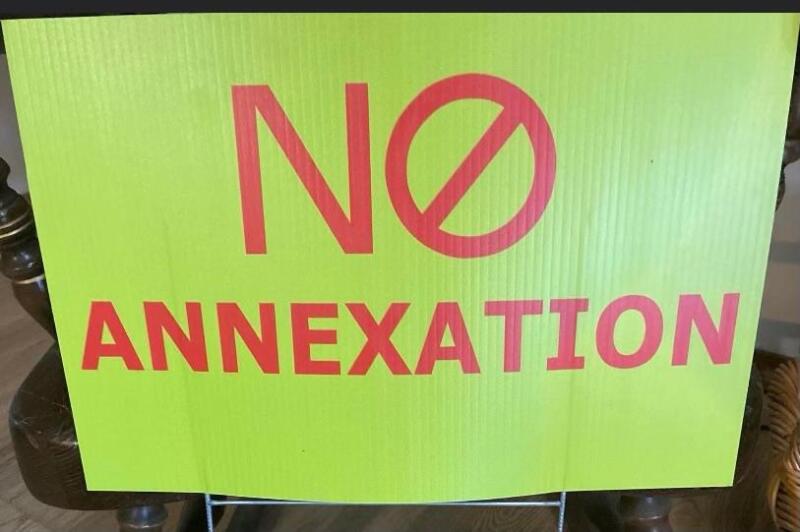 One of the signs Kathy Chastain is putting out to make her point.

Winlock has seen a lot of growth, but the biggest concern for many residents is the annexation of the Urban Growth Area (UGA) into the Winlock city limits. This week, signs stating "NO Annexation'' have been placed in the Winlock UGA and it's the work of one lady, Mrs. Kathy Chastain. She lives in the UGA and has already seen the impact to her property due to the timber being removed. Kathy's property has "standing water," for the first time in 36 years. She is just one of many who will see changes if the UGA is annexed.

Kathy has been busy fighting the annexation since she heard that the City of Winlock has applied to annex the UGA. The interesting part is the company that has been pushing the annexation is now on hold due to not enough water hookups, but the annexation is still moving forward. The City of Winlock has determined, through the developers mainly, that they have the required votes to annex in the UGA. The vote is based on value and not the number of residents or even if they live here. It's not about the citizens, it's about the power of corporate America to take over small communities.

The developers are in the majority and the Winlock City Council has let the developers run Winlock. A good example is the donation of $2.5 million for infrastructure versus the $8-$10 million the city needs. For comparison, Napavine received $5 million in infrastructure funds from a new commercial building that's going to be about ¼ the size of Winlock's new industrial area.

The Lewis County News sat down with Kathy Chastain and asked a few questions, here are her responses.

Why did you decide to fight the annexation?

It's the right thing to do. Winlock should have asked for impact fees from these big developers. Since they haven't done this the citizens may be taxed to death. This community is made up of long time citizens that frankly can't afford it. Nor should they!

What is your goal for the signs?

My goal is to depict to the city council that regardless of what they are being told, it's the long-time residents who do NOT wish to be annexed. A visual so to speak.

What has been the interaction with the mayor and council when voicing your concerns?

Most of the council do not speak during the council meetings. I always ask questions and usually the mayor will say he will get me an answer. In a recent June meeting I asked where the annexation process was. Mr. Webster said "it's at about 75% in favor." I stated "you mean the 75% comes from the developers?." To which Mr. Webster stated "No, I've spoken to the residents and they all want annexed." I had already been going door to door to the UGA residents. No one I spoke to wanted annexed.

Has any council member reached out to you to discuss your concerns?

No. I'm pretty much a one woman army. But I will say so many of these citizens have reached out to me in general disbelief that our small community is being uprooted by outsiders!

Has the mayor reached out to you and what has he said? Has he given any plans to the constituents or you as to what this is about? Has the mayor informed you why he is annexing the Winlock UGA?

At one meeting the mayor wanted to speak to me personally after the council meeting whereas he asked me to join the Winlock Planning Commission. I declined as I had first hand knowledge that the planning commission is in name only. The mayor refuses to use the planning commission for building only the comprehensive plan. The comprehensive plan is out of compliance and has been. I also believe that since so many have quit the planning department they don't have enough for a quorum. It's out of compliance and there is no planning commission. I asked him to provide a list of pros and cons to annexation. I'm still waiting. I've done my own research and the cons outweigh the pros.

What do you see as the best scenario for the citizens in the UGA?

My hope is the building takes a pause so that the real picture can be portrayed. There are not enough water hookups, roads are in dire shape, we need police and fire. Just a long list that SHOULD HAVE BEEN thought through before we were put into this situation. We citizens should not be forced to pay for the needs of these people from big cities that are moving in on us.

Kathy is on the Lewis County Planning Commission, she recently accepted this role. She will be representing the citizens of Lewis County. There is no doubt Kathy will look out for the county after what she has endured.