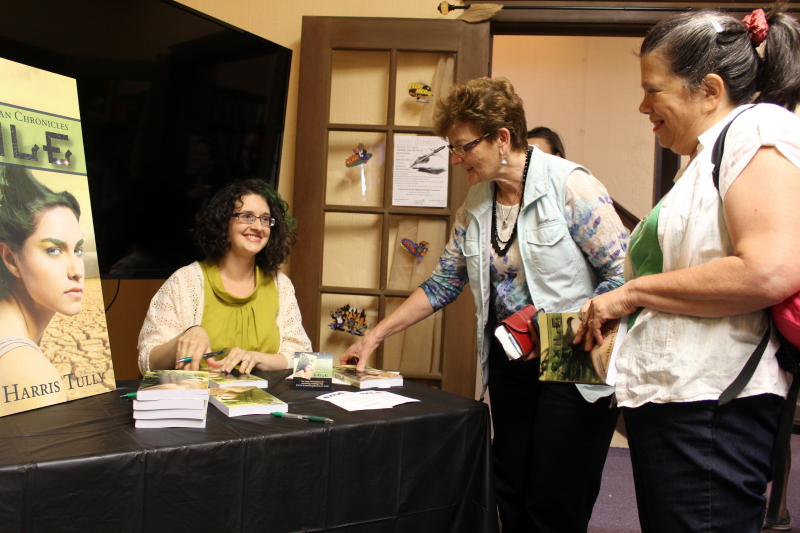 Raymond author Karen Tully signs copied of her latest book "Exile" the first in a trilogy of the Faarian Chronicles. Her next volume is due out next year.

Raymond author Karen Harris Tully was out promoting her new book at the Timberland Library in Raymond.

In a standing room only gathering, Karen Tully launched her first book, Exile, the first of a scheduled trilogy on the Farrian Chronicles.

The series, a teen sci-fi, takes her main character Sunny off planet earth into an off world adventure. To help aid her reading of a portion of the book, Tully wore a green streak in her hair, like that of the characters in the book, as they live in an oxygen depleted world filled with chlorophyll.

Tully admitted to the crowd that the book has taken her ten years to finally get it put on paper and published. But it is now available in both print and digital versions. The original draft was broken down into a trilogy, so she already has a good jump on the next volume of the series due out next year.

Based on her dreams, Tully started keeping a dream journal and found that her dreams were linked together and was telling her a story, the story of Sunny and her adventures. Influenced by authors like J. K. Rowlings and Suzanne Collins, Tully liked the adventures she was reading but was unable to find the story that she really wanted to read in any bookstore. The series is strong in female characters, a point that Tully makes she saw was under served in the sci-fi or action adventure genre.

Targeted for 12 - through teens, Tully wanted to bring a sense of adventure and excitement but maybe not as heavy as you would find in adult stories. And for those new to writing or wish to be authors, Tully gives some advice.

"It is a long process but you must be persistent. Get with another author who can serve as a mentor writer if you can, and just write."

If you missed the launch party for the book you can get another chance as Tully will be doing a book signing at Flowers by Lynne on July 30 and at the Ocean Park Timberland Library on Aug. 22.