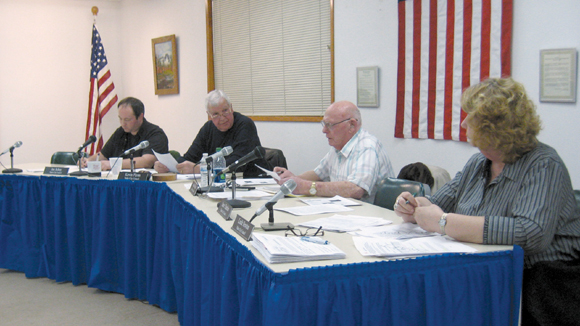 (Left to right) Vader City Council Members Joe Schey, Kevin Flynn, Andy Wilson and Linda Newton deliberate over a ban restricting both medical and recreational marijuana production during their Jan. 23 meeting. Mayor Ken Smith and Council Member Janet Charlton had been absent for the discussion (Smith was reportedly attending to a family matter while Charlton’s absence had gone unexplained). The ban passed unanimously and has been in effect since Friday.

The Vader City Council passed a ban against both recreational and medical marijuana production during their Jan. 23 meeting, effectively halting attempts to establish a large-scale marijuana farm in the city’s industrial district.

Though previously advised by legal counsel such a ban would violate the rights of marijuana growers operating under new state regulations, a legal opinion issued Jan. 16 by Washington Attorney General Bob Ferguson stated the new law did not “pre-empt local authority to regulate such businesses.”

The ban passed unanimously (with the exception of Council Member Janet Charlton, who had been absent for unknown reasons) and has been in effect since Friday. It will also last six months, with the ordinance stating the ban will be reexamined at that time in light of anticipated changes to state laws, as well as to assess whether or not concerns regarding marijuana’s impact on community well-being have been resolved.

Vader had otherwise been looking at the possibility of 5.5 acres of marijuana being produced on industrial land owned by Seattle developer Brandon Milton’s company, MPM, which owns all four parcels within Vader’s industrial district. Milton and three others have applied to grow and process marijuana at the site, and he says the new ban may come to nothing for the city, stating Ferguson’s opinion is merely an opinion and not legally-binding.

“The attorney general’s opinion muddied the water more than anything,” he said, stating a bill currently before state legislators (HB 2322) could overturn the opinion by disallowing cities and counties from passing bans and restrictive zoning ordinances against recreational marijuana. “We’ll just have to see how the bigger picture shakes out.”

Attorney Carol Morris, with the Risk Management Services Agency (Vader’s insurance provider), sent Vader a memo Jan. 21 in which she concurs such legislation would render Ferguson’s opinion obsolete, but added, in the absence of any changes, the opinion of the Attorney General’s Office is regarded significantly by courts when interpreting the law.

“It is difficult to predict exactly how a court would respond to a challenge,” she said in the memo, adding the matter is complicated, legally, by the fact marijuana remains criminalized under federal law.

Milton has stressed his lack of desire to take Vader to court over the issue given how both parties would likely suffer financial losses regardless of the outcome, and has not indicated any immediate interest in doing so.

“I don’t want to see that go to a giant lawsuit,” he said. “I’d rather see the city spend their money on things that matter in town, and I’d rather spend my money building my business…I’d rather have everyone be a winner.”

He said it is his hope, rather than seek legal action, to re-open a dialogue with city leaders and reach a compromised solution such an ordinance passed Dec. 17 allowing marijuana use only in industrial zones. Mayor Ken Smith, however, vetoed the ordinance, stating he felt better alternatives existed in light of the volume of applicants intending to grow marijuana in town, and the council upheld his veto Jan. 9.

But council members have expressed a desire to act on the issue rather than continuing discussions, according to City Clerk Jill Nielson, who stated council members have said they are frustrated by a lack of new information shared by Milton during his most recent presentations.