John Brockmueller, a chief for all south county cities 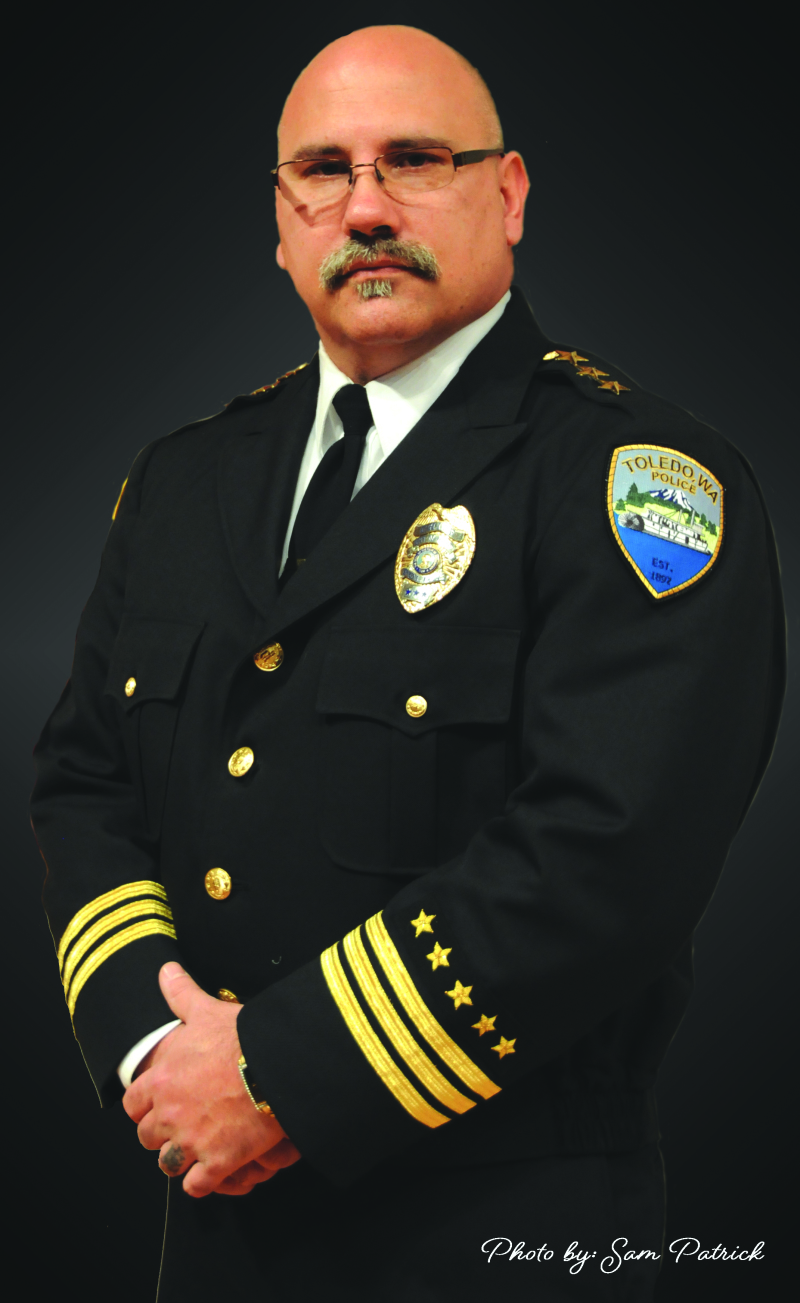 John Brockmueller, Toledo Chief of Police is leaving Toledo, but he is not going far. John is going back to one of the places he has been before, Napavine. He is the new Chief of Police for Napavine beginning October. During his work history in law enforcement, John has been the Chief in Winlock, Toledo and Napavine.

John's career started in 1987 as a reservist in Toledo and he continued until 1989. He then went to Napavine as a provisional officer in a part time position. After being there a couple of years, John went through the academy as a full-time officer for Toledo. He stayed in Toledo from 1991 to 1994. Then in 1994, he made his way to Winlock where he stayed until 2005. In the beginning of 2005, John went back to the city where it all began. In 2008, John became Chief of Police of Toledo and has been there since. At one time, John had all three city police cars at his home, he has been a south county officer/chief for his entire career.

John has enjoyed his time in Toledo, he stated, "Toledo is a great little city. It has always had a place in my heart." John is going to miss some things in Toledo as he moves on. The most important thing is the people. He continued, "I will miss the people, they have always been kind to me. Even when I would arrest and take someone to jail, they have been very nice. I will miss the people who work for the city, they have been fabulous to work for." John's parting message is, "I want to thank the citizens for their support throughout. I enjoyed working with everyone to make Toledo a safer place."

Mayor Dobosh stated, "John has been invaluable to the city and the citizens. John has always kept me up to date on situations about the city. We will miss him."
"John has been great to work with and will truly be missed," said Clerk for the City of Toledo Michelle Whitten. "He has always been someone you can count on, and a very caring person. It will feel like a brother has moved out of the house and we will all miss him, but he won't be far. I am very proud of his accomplishments and can't wait to see the great things he will do for Napavine. They are very fortunate to get an upstanding Officer like John. I am sure I am not alone when I say Thank You John for your hard work, your easy going disposition, and your friendship over the last 15 years in Toledo."

"I am excited to work for the City of Napavine," John said. "I look forward to the opportunity to meet the citizenry and help the community. If you see me and don't know me, please introduce yourself." The move to the Napavine force will take place on October 1.

John hopes to bring great things to Napavine, "My goal is to make the Napavine Police Department the best it can be. I would like to have community involvement. I want to be part of the pride in the community."

John continued, "I am looking forward to working with the staff at city hall, the council and the mayor, great things will be happening."

Mayor Shawn O'Neill of Napavine is excited to have Chief Brockmueller on board, he stated, "We are really excited that Chief John Brockmueller made the decision to come to Napavine. One of the many things that stood out about him was that he shares Napavines vision of the importance of community engagement, and building a solid relationship with our schools. He has a great reputation, and has maintained strong partnerships with other departments and municipalities due to his willingness to help where and when he is needed. We look forward to Chief Brockmueller's leadership for the Napavine Police Department."

As many know, Chief Brockmueller is loved by every community he has worked in. He truly has been an asset to each city, bringing different approaches to each. Toledo will miss the chief, no doubt, you can see that when he talks to the citizens. Now that he is moving to Napavine, he will bring his great communication style and his knowledge to the "Little City on the Hill."