Attendees of the health fair were allowed to fill a bag with clothing, food and toiletries from tables of donations gathered with the help of multiple local organizations and businesses.

It is not always possible to prevent homelessness, but a growing number of organizations in Lewis County are stepping up to the plate to help individuals survive and transition out of being transient.

Dozens of such organizations were on hand during Project Homeless Connect Thursday at Yard Birds in Chehalis, part of an annual health and wellness fair organized by the Lewis County Department of Health & Social Services (DHSS).

DHSS Housing Programs Coordinator Michaelle Sorlie said the event began six years ago as part of a state requirement to keep track of homeless populations, known as a point-in-time count. She said, since so many homeless individuals were gathering in one spot for the count, DHSS began inviting local charities and non-profits with resources for the homeless so those in need could connect with providers.

This year saw the biggest number of participants at the fair so far, requiring their venue to move upstairs to the larger conference area at Yard Birds, with a wide, open space for vendors and a room to the side for free meals. Free haircuts were available as well as kid’s books, immunizations for people and pets, and various housing opportunities for individuals and families.

One of the most popular and effective resources to be provided this year was a chance for participants to fill a large bag with clothing, food, toiletries and the odd sleeping bag, choosing according to their size, taste and needs.

“The real point of it is to get people connected with services so they can access them throughout the year,” said DHSS Social Worker Megan Pickus, who was in charge of the givaways this year.

Pickus said the clothing and other items are available year-round through local charities such as New Hope Church, operated just up the hall in Yard Birds, and most organizations can contact others when resources are low or lacking.

“Most of these agencies know about each other,” she said, “so, if they were to go to one place and they say, ‘Well, I don’t have it. Let me see if this other place might have it.’ So, we kind of know who’s who, to an extent, as far as what’s out there.”

Of the giveaways at her table, Pickus said warm socks, shoes and sleeping bags and usually their greatest need and the first to run out. Those interested in donating for future health fairs or throughout the year can contact the Lewis County Shelter Program at (360) 269-6688.

A myriad of addiction recovery services and life skills resources were also available that day. Among the more visible was a booth providing free meals by Jesus’ Name Pentecostal Church, based in Chehalis. Outreach coordinator Kimmie Strand said her church is no stranger to tackling the challenge of homelessness and actively seeks out opportunities to help.

“We go out and we help them, bring them to church, bring them to Bible study, they learn about the Lord, and we also help them go to different resources,” she said, adding her church provides regular resources such as a soup kitchen every Sunday at Rotary Riverside Park. “We help them as much as we can when we’re out on the street.”

Strand emphasized the need to address a homeless person’s whole being, not just their addictions or employability. She said the reason her church’s program has been and continues to be successful is because the focus is on spiritual health, and that faith becomes the foundation upon which individuals are able to build up the skills to recover from the challenges that led to their homelessness.

“It’s trauma,” said Strand of the factors contributing to homelessness. “It’s stuff that they’ve been brought up with. It’s what they know, a lot of them…They have to be rehabilitated, retrained.”

Strand’s church and others personally bussed in people from all over the county to participate, and booths remained active and attended until the event closed down at 3 p.m. Pickus said she was “cleaned out” at the end of the day, but that it was never their intention to have leftovers.

“We get pretty wiped out, which is excellent, because that’s what it’s there for,” she said.

To learn more about ongoing homeless outreach programs in Lewis County, including what needs are pertinent and how to become involved, contact DHSS at (360) 740-1434. Sorlie added the demographics from the count will be made public during a Lewis County Commissioner’s meeting sometime in May. 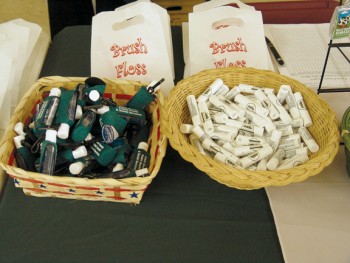 Lip balm, hand sanitizer and toothbrushes were among the personal hygiene items available at a booth operated by the Lewis County Department of Health & Social Services. Such resources were acquired through grant programs and with the participation of local charities such as New Hope Clothing and Hygiene Bank operated out of Yardbirds. Members of the Medical Reserve Corp were also available to provide free flu shots for children and whooping cough vaccinations for all who were willing to brave the needle. 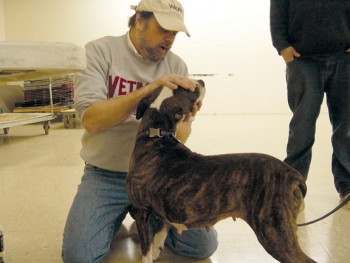 Dale Marker, owner of Jackson Highway Vet Clinic, evaluates the health of Jasmine, a 4-year-old American Staffordshire Terrier. Free pet exams and rabies shots, as well as food a treats, were available at Marker’s booth, which he said were provided in part by donations from his regular customers. He said the animals he meets at the health fair are largely in good shape, stating owners tend to care well for their pets in spite of living conditions. “I haven’t seen anything that is abnormal,” he stated. “Everyone I see really does care.”