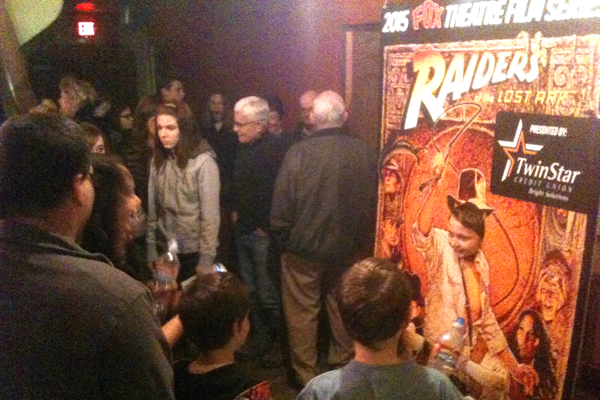 Guests of the historic Fox Theater, in Downtown Centralia, take pictures in front of a promotion poster for Indiana Jones and the Raiders of the Lost Ark Saturday during a screening that saw the theater's first sellout crowd since present restoration efforts began seven years ago.

Organizers with Centralia's historic Fox Theater have reported their first sellout crowd in seven years after Saturday's screening of Indiana Jones and the Raiders of the Lost Ark kicked off their 2015 film series.

Scott White, president of the non-profit group who have been restoring the building since 2008, said the support of sponsors and word of mouth has been drawing ever-increasing crowds over the last few years, resulting in a packed house--and then some--on Saturday evening.

"We had been doing some really old, obscure stuff that was public domain," said White of the early years of restoration. "We would get 100 people if we were lucky, for the whole day."

White said, since 2013 when the selection of films was somewhat modernized, attendance began to grow dramatically, and Saturday night saw so many theater-goers (around 450, White estimates) volunteers had to rush extra chairs to the balcony to fit everyone in.

"This year is just off the charts," said White, who mentioned, with growing support from local business sponsors, the theater has been able to double the number of films being shown in this year's series, from which tickets sales will generate funds toward restoration projects.

Of the specific projects White hopes to tackle in the near future, he said the exterior brick wall of the building, as well as the plumbing and HVAC system, will be repaired or replaced, while ongoing plans are being developed to restore the front entrance and lounge area.

He said, if fundraising efforts continue to double each year as they have in the past, it may be another five years before restorations are completed, which he said will make Fox Theater the largest film venue between Portland and Tacoma.

To learn more about the 2015 film series, or learn how you can help volunteer, call (360) 623-1103, or visit their website at www.centraliafoxtheatre.com.

The next screening in this year's series will be Singin' in the Rain on Saturday, March 14, at 2 and 7 p.m. The Fox Theater is located at 123 S. Tower Ave., in Centralia.