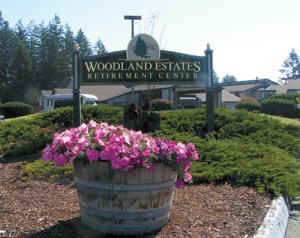 Looking to join a retirement facility but wary of traveling outside Lewis County? Woodland Estates Retirement Center, based in Chehalis, is able to provide the comforts of home with the security of living in a community, and has multiple units currently available.

Ranging from studio apartments to cottage duplexes, Woodland Estates is able to cater to a wide array of budgets and lifestyles.

“There’s not a contract. It’s all month-to-month,” said Administrator Jodi Stanley, stating some regulars often rent during the warmer months and spend winter and fall out-of-state. “People rent when they’re ready to rent.”

Available to residents living in the apartments of the main facility are regular exercise classes, movie nights, bingo games and three meals a day, all included in the rent. Residents in cottages spread throughout the 26 acres of the facility have the same access to events and one meal per day included, though Stanley said anyone—resident or otherwise—is welcome to take part when meals are served.

“The food is the largest component to a good facility or not, and our food is excellent,” said Stanley, stating guests who tour the facility are treated to a free meal to gather the full experience of living at Woodland Estates.

And those living at the center come from a wide variety of backgrounds, said Stanley, stating there is a mixture of professions, educations and service records among residents.

“I would say we have a huge diversity,” said Stanley. “We have Rosie the Riveters, we have people from different wars, we’ve got pilots, we’ve got homemakers. We’ve got a huge, diverse population.”

There’s also a diversity of faiths, with regular church services being organized by a rotating list of local denominations.

“It’s pretty much equal,” said Stanley of the representation of churches, stating the owners of the center are Seventh Day Adventists and make sure Sabbath School transportation is available on Saturdays.

Stanley added the greatest commonality among residents is the bulk are from Lewis County, stating many new residents often run into old friends or people they have not seen in a long time. And of the facilities in Lewis County available to retirees, Stanley said Woodland Estates is in a league of its own as far as offering independent living accommodations.

As an independent living facility, Stanley said they do not employ a nursing staff, but residents can pay for their own nursing services and often find it cheaper than paying for assisted living. Woodland Estates also does not have a contract to accept payments from Medicaid or Medicare, but is able to work with insurance providers if residents have compatible long-term care insurance.

When asked what usually encourages residents to move to Woodland Estates, Stanley said people often find the rooms to be larger than they expected, enjoy the cleanliness and lack of unpleasant odors, and again touted the quality of the food.

“I would invite anybody that’s thinking about it to come on by and just visit,” said Stanley. “There’s no pressure sales; we do not pressure you, we do not call you and say, ‘Are you going to move in?’ When you’re ready, you’re ready, and we believe that.”

Residents enjoy tossing colorful balls around during a rousing session of Sit and Be Fit, a regular exercise program held Mondays, Wednesdays and Fridays. Multiple such events are scheduled regularly at Woodland Estates, and an Activities Director is on hand to organize custom events and special requests.